Selling clothes with a cleaner conscience 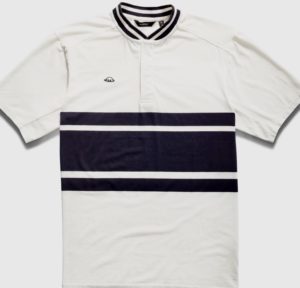 Scott Morrison, co-founder of Radmor Golf in Washington State, had an over 20-year career in the denim industry. The former college golfer for the University of Washington left that clothing sector in part because of its troubling environmental impacts. As he noted, denim creation produces pollution from indigo waste and other problematic elements.

He and co-founder Bob Conrad, a fellow UW golfer and former touring pro, decided to go a different route – still cotton-based, but with a better environmental impact. That led to the creation of Radmor Golf in January 2020.

The company’s apparel uses predominantly Pima cotton sourced from Peru. “We use natural fibers whenever possible. That makes a huge difference in terms of waste,” he said. Thompson noted that natural fibers biodegrade in landfills in a matter of months, while the technical fabric can take decades or more to break down.

Thompson said the company uses no “virgin polyester.” Their Elastane polyester is often only 4-5% of the total in any garment and adds a bit of stretch. “Our customers are really happy with the product, and we’ve had a lot of success in the direct-to-consumer market,” he said.

The company is not completely serious, thankfully. 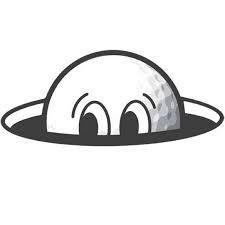 The Radmor logo is a cartoon-style golf ball with eyes, just as it begins to drop into a golf hole.

The clothing tag for each article also promotes environmentalism with a bit of whimsy. The recycled paper is cut so that when folded it becomes a practice putting cup – a form of double recycling, in fact.

Radmor’s lines can be found currently at green grass shops on the West Coast and at major department stores Nordstrom and Saks. Thompson hopes to expand the line’s presence in more green grass shops throughout the United States.

Garmin is a popular GPS navigation technology company. Its products serve the outdoor/fitness markets as well as the auto, marine, and aviation sectors. In the Cape Region, Garmin devices are often seen on sportfishing boats, bikes, and local golf courses.

At Demo Day for the 2022 PGA Merchandise Show last January I met Mike Paoli, a District Sales Manager for Garmin and a 2001 graduate of Salesianum High School in Wilmington. We spent some time making the usual connections among Delawareans, and then reviewed a selection of Garmin’s golf products.

I was most impressed at the range of attractive GPS options for golfers across several price points.

We began with the entry level Approach S12, a black-faced GPS watch that keeps things simple. A sunlight-protecting face provides front, middle, and back distances to the greens for over 42,000 pre-loaded golf courses, with a 30-hour battery life in GPS mode. Normally sold for $199.99, it was recently listed on sale at the Garmin website for $149.99.

The Approach S42 at $299 SRP adds to the S12 base with a color touchscreen display, interchangeable watch band options, and a view of each green. The Approach 62, at $549.99 SRP, uses a bigger screen, shot tracking options paired with Garmin’s CT10 sensors, virtual caddie information, and as Paoli described it, “health and wellness options,” including heart rate and a pulse oximeter.

If you want GPS data but don’t like wearing watches, Garmin offers the Approach G10 at $129.99 SRP. This device can clip onto your belt or rest inside a pocket until you need to check its basic data, much like the Approach S12. It will also keep score.

The Marq model was the top of the Garmin watch line I saw, at $1,850 (SRP). This luxury smartwatch included the bells and whistles of lower-priced options and a lot more. It can be paired with the Garmin Golf app for strokes gained analysis. It will track how hydrated you are during a round and other features handy for skiing, trail hiking. It can also access other global navigation system data when GPS is hard to come by.

Paoli also showed me two handheld GPS options, the Approach G30 ($249.99 SRP) and Approach G80 ($499.99 SRP). The G30’s 2.3” color display is easily readable and comes with Touch Targeting that provides precise distances to whatever you point to on screen. If you need to stay in touch with what’s happening off course, the device displays smart notifications for emails, texts, and phone calls.

The G80 upscales to a 3.5” touchscreen display and includes an integrated launch monitor displaying club head speed, ball speed, tempo, estimated distance, and smash factor. With up to 15 hours of battery life in GPS mode, the device should handle 18 holes, a virtual round against your buddies, and a few practice sessions.

We also looked at the Approach R10 ($599.99 SRP), Garmin’s entry into the small-scale launch monitor market. The fully transportable tripod-mounted radar device will last up to 10 hours on a single charge. Set 6 to 8 feet behind the golfer, the data upload to a smartphone attached to a golf bag with a mounting clip for quick viewing of the results.

The data include over ten metrics – not as much as a full-scale Trackman, for example, but enough to keep track of trends. 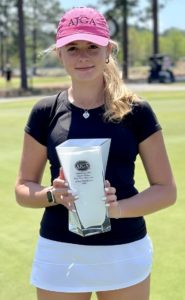 The Sussex Academy ninth-grader shot four-under par in the 54-hole contest among girls 12-15. Highlights included a 67 in the second round and birdies each day on the par 5 fifth hole.

Quoted on the AJGA website, Brockstedt explained her par score in the final round: “I went out there today trying to stay patient and not be aggressive at all.”

Sussex Academy golf coach Doug Grove said, “I’m really happy for her. She’s been working hard, and I’m thrilled that her efforts paid off by winning a big event.”

Longleaf is the same course where Brockstedt won the U.S. Kids World Teen Championship in 2020. She has played well several times in the Pinehurst area, including the regional playoff where she qualified for the national Drive, Chip and Putt Championship at Augusta National in 2018.

Something about the Pinehurst area of North Carolina must agree with her.

Sawyer’s spring break continued at the seventh annual U.S. Women’s Amateur Four-Ball Championship, which kicked off April 20 and continues through Sunday, April 24, at Grand Reserve Golf Club in Puerto Rico. Brockstedt and her partner Ellison Lundquist of Furlong, Pa., join a field of 128 golfers (64 sides) in Puerto Rico for a chance to win one of the most prestigious honors in golf, a USGA title.

This is also the very first USGA championship to be held outside the U.S. mainland. Brockstedt and Lundquist are competing in their first USGA championship. Last June, the two co-founded a charity junior golf tournament called the Ace Cup with a group of friends, raising more than $70,000 during its inaugural year in support of the Alzheimer’s Association.