Don Wade is a longtime golf writer with a great pedigree. Besides his work for Golf Digest Magazine, CBS, and ESPN, he may also be the greatest collector of golf anecdotes the world has ever seen. The vast assortment of tales of turf, traps, triumphs and tragedies appear in Wade’s long-running, successful And Then X told Y series. 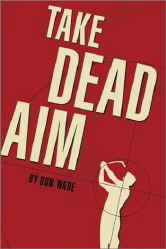 Wade has now branched off into fiction with his new book, Take Dead Aim (Sleeping Bear, $24.95).

After reading his first effort in the genre, the primary question I had was, “What took you so long, Don?”

It turns out that all those years of listening to stories told by others gave Wade a tremendous advantage in writing remarkably realistic fictional conversations.

When the plot involves international espionage, terrorism, and three famous golf tournaments, that kind of skill should be appreciated.

Tom Quinn is a long-time CIA operative who’s contemplating retirement. His golfing buddy since their days as teenage champions is gently suggesting that Quinn could do very nicely by joining his banking firm, even as Quinn beats him 1-up on a legendary Massachusetts layout.

On the other hand, Quinn’s current boss, the Deputy Director, also needs him for one last assignment that could once again take advantage of his skills as a spook and on the links.

It seems someone is trying to kill a prominent player on the PGA Tour, and is not above using a skilled assassin for the purpose. For reasons I won’t disclose in this review, after a shot is fired the evidence points to a potential international crisis involving the British government and their intelligence service, the famous M.I.6.

Of course, M.I.6 and the CIA have a long history of working together successfully. It’s not long before the Deputy Director and his English counterpart agree to put two of their best agents together to stop the assassin before all hell breaks loose.

As sometimes happens in spy novels, this collaboration also includes the pleasant opportunity for a boy-meets-girl situation. Kathryn Devlin is a stylish, smart British agent with a great figure, a beautiful complexion, and a real talent with a Baretta–in other words, the perfect woman for our man Quinn.

Besides his naturalistic dialogue, Wade shows he knows something about romance among the mature. After all, these two agents are not fresh out of spy school. The developing relationship between Devlin and Quinn is significantly affected by their prior experiences. The way in which Wade treats this aspect of the story also rings true. Naturally, there is a love scene or two that fits better in a Hollywood movie than real life, but it’s a forgivable lapse.

In the meantime, however, there’s plenty of skullduggery afoot, and the two spies have to figure out how to stop the assassin. The golf action shifts from the Los Angeles Open at Riviera, to The Players’ Championship in Florida, and on to the Masters in Augusta.

For the golf sequences, Wade shows how often he’s been to all three venues to cover the tournaments. The scene setting is very well done. TV-conscious golfers will quickly recognize several of the landmarks Wade uses in these passages, but non-golfers won’t feel lost. There are even a few handy playing tips tucked into the plot, including one particular playing principle that becomes the critical piece of evidence in the eventual resolution of the case.

The ending creates the possibility that there will be additional adventures featuring Quinn and Devlin, which is an altogether pleasant prospect.

As with other successful fictional efforts, this story also creates some vivid mind pictures that make me think it could work well as a movie.

Either way, this was a really fun read. I hope there’s more coming.