The third hole at the Ed “Porky” Oliver Golf Club in Wilmington is a long par 4 that runs parallel to Greenhill Avenue. Much of the hole is separated from this busy street by a high, dark green chain link fence.

Sometimes that fence isn’t quite up to the task. I have a distinct memory of watching a car screech to a halt on Greenhill as its driver tried desperately to keep the windshield from being hit by a badly hooked golf ball.

If memory serves, the driver succeeded – but somehow I really can’t recall if I was the golfer that hit that hook.

That incident came to mind as I reviewed the comments made by the United States Golf Association and the Royal and Ancient about their recent efforts to deal with a recurring rules and pace of play problem in golf – namely, balls that are lost or go out of bounds.

In the effort to speed up the game and also make it less daunting for those who are new to it, many folks suggested that the stroke-and-distance penalty for going OB or losing a golf ball should be softened a bit. They recommended treating OB stakes the same as the red ones that mark a hazard on the course, such as a pond.

In a typical red stake situation, golfers drop a ball adjacent to the pond no closer to the hole, add a penalty stroke, and move on. Rule 27’s stroke-and-distance procedure for OB shots forces golfers to count the first stroke, add a penalty stroke, go back to where they hit the shot, (often the tee box), and hit again. This process tends to slow down the game for the golfers playing behind the unfortunate golfer who is following the rule. 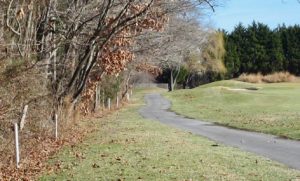 Sometimes an alternative arrangement appears to be suitable. Consider the par 4 third hole at Rookery South. A forest left of the fairway is marked with OB stakes, in part because the property line for the course also runs along that forest edge. A pond sits on the right side of the fairway. Its edges are staked with red posts, and golf balls often curl into the water from a right-hander’s bad slice or fade.

It would be tempting to have the forest edge marked with red stakes instead of white OB posts. It would speed up the game if golfers took a penalty stroke and dropped a new ball close to where they saw the first one sail into the oaks and pines, just as they could if their ball had gone into the pond.

However, the USGA and R&A recognized the fact that not all OB areas are quite so “safe” for golf balls to leave the property without risk to others, as in Rookery South’s third hole. Here are the reasons given for keeping to the current OB rule instead of softening it, taken from the USGA website:

“Out of bounds is a strategic part of the challenge of playing some holes and this would be undermined if players could hit towards out of bounds with less concern for the consequences;

There are sometimes safety reasons to avoid having players play towards out of bounds (such as balls possibly ending up on roads or adjacent properties), such that out of bounds should not be treated as just another obstacle from which relief is allowed; and

It is fundamentally a different thing to hit a ball outside the boundaries of the course than to hit it on the course and need relief. “

They have a point.

All is not lost, however. The proposed new Rule changes effective Jan. 1, 2019 potentially reduce the number of times that players must take the stroke-and-distance penalty.

First, the changes permit the determination of red- and yellow-staked “penalty areas” to deal with more than just water. These other areas can be marked as penalty locations with colored stakes where past experience indicates lost balls are a nagging problem. Adopting this approach makes a lot of sense.

Second, the new rule that shortens the time to find a ball from five minutes down to three should reduce search delays and “may also encourage more players to play a provisional ball where there is a possibility the ball will not be found.”

Finally, the new “Maximum Score” rule option for stroke play, such as double par or triple bogey, could mean that “players may be less inclined to return to play a ball under the stroke-and-distance procedure.”

Watching your golf ball fly or bounce out of bounds can be pretty demoralizing, especially when the rest of your round had been going pretty well at that point. Even so, the point of the game is to see how well you can play the golf course. OB stakes help mark off the course boundaries and should be respected. With the new rules in place, however, the need to use the stroke-and-distance procedure should be reduced.

Signing up for a lesson from your local golf professional might also help.