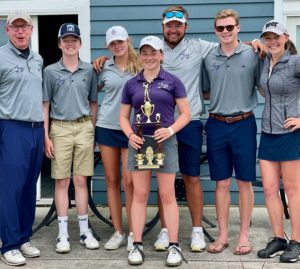 The Lydic sisters finished the 18-hole tournament in a tie for first place with one-under-par 71s, with Brockstedt in third with a one-over-par 73. Sarah then defeated her older sister with a birdie on the first hole of the playoff to win the individual championship.

“My putt was on exactly the same line I had when I played the hole the first time,” Sarah said.

As for her round in general, the individual champion and current Academy ninth grader credited her short game. “I could get up and down a lot today, which was good because my putter wasn’t great. I put a lot of shots close and was chipping well. On the [par 4] seventh hole, my second shot finished inches from the hole,” Lydic said.

Adison Browne completed the team scoring for the Academy with a fine 84.

The Caesar Rodney team came in second among the twelve participating high schools, with the Cape Henlopen Vikings finishing in third place.

Tom Burn scored a 95 and Ethan Mercer finished with a 96 to complete the Cape scoring. Dylan Baker and Chris Williams also played for the team in their first-ever 18-hole scholastic competition and were steady.

Reynolds’ 92 was his best performance of 2021 by far, and he credited his tee shots. “I got the driver working right from the start, and it helped a lot,” he said. He also played the challenging par 4 seventh hole as a routine par, with a 4-iron to the fairway and a wedge into the green for a two-putt finish. A quadruple bogey on the 14th hole marred an otherwise fine back nine for his day.

Mercer accepted his score but didn’t have to like it – and he didn’t. “I started strong and had a really weak finish,” he said. “I was 3-over through 5 and holes 6 though 9 were a disaster. I spent the rest of the day trying to make up for them.”

Viking head coach Robert Harrod said, “I thought it was a great day for Cape Golf. I was excited by the personal bests scored by several golfers, including Seth, Dylan, and Chris. It was also great to see them come together as a team and applaud each other as they finished.”

The State championship at Maple Dale Country Club in Dover June 1-2 will complete the 2021 scholastic season.

Cape Region Scout Troops 2540 and 1105 are once again the beneficiaries of the June 4 Sixth Annual Par 3 Fundraiser at Midway Par 3.

According to Golf Committee Co-Chair Paige Fitzgerald, “This troop really has bent over backwards to do some great stuff for the kids through the pandemic.” Tournament proceeds will offset expenses for camping and field trips, equipment, and summer camp.

The popular event begins with a shotgun start, with up to five players per team in a scramble format. The $35 per player fee includes hot dogs, hamburgers, and snacks, as well as club rentals for the player-friendly layout. Golfer prizes and a silent auction will also be part of the fun.

Playing spots and sponsorship opportunities are still available. To sign up or for more information, contact Fitzgerald at paigefitz722 @gmail.com or 302-542-4979, or co-chair Jean Hendershott-Lee at boatsgunner2010 @gmail.com or 302-856-6278.

In last week’s column I mistakenly listed Kings Creek Country Club among the Delaware golf courses for which GolfLogix .com offers one of its Green Books. I regret the error and hope the company soon creates this resource for local avid golfers.

The Mulligan’s Pointe Ladies played a team 6/6/6 game May 25. Six holes are played alternate shot, six as best ball of partners, and six as a scramble.

The Kings Creek Ladies 9- and 18-hole groups combined for a shamble format tournament May 21.