Sussex Academy’s first loss of season by a single stroke 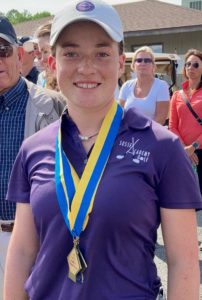 The Sussex Academy golf team’s undefeated 2022 match record ended on May 5 by a single stroke.

Playing host at Kings Creek Country Club to Tatnall School of Wilmington and the Dover High Senators, the Seahawks beat Dover 143-198 but lost to Tatnall 142-143.

Sarah Lydic won medalist with her 33 on the front nine, followed by her sister Hannah’s 34 and Sawyer Brockstedt’s 35. Dominic Piperno’s 41 was one of his best results for the Seahawks.

Tatnall’s Matt Homer shot a 36, as did Jeff Homer and Anthony Ciconte. However, Jack Homer made a birdie on the last hole to win the match.

Sussex Academy head coach Doug Grove said, “I thought [the match] was great. Two heavyweight teams played at a very high level. The match featured 7 of the top 9 ranked players in Delaware who combined to shoot 2 over par. We were very good, Tatnall was one shot better. We finished with a 143 (3 over) and lost as Jack Homer birdied the last hole on a sidehill 15-footer for the win.”

“I thought the match embodied everything that is great about high school sports and I’m really proud of my team. It’s hard to imagine high school golf played at a higher level than what these two teams did. As expected, Sarah, Hannah, and Sawyer were fantastic. Our younger players gained a lot of experience against some really good competition that will help us in the conference and state tournaments.”

Tatnall knows what it’s like to play well and still lose. Archmere Academy defeated the Hornets by two strokes April 29 despite Tatnall’s team total of only 3 over par.

The day before the Dover/Tatnall tri-match, the Seahawks traveled to Heritage Shores to play Sussex Tech and a solo golfer from Woodbridge. The Academy won both contests, 161-185 against Tech and 161-300 against Woodbridge by forfeit.

Caleb Wilson was best for Sussex Tech with his 43. Luke Bunting’s 44, Aiden Kvilaug’s 48, and Corey Duke’s 50 made up the rest of Tech’s total.

The Seahawks returned to Kings Creek CC May 9, defeating Smyrna 164-213. Once again Sarah Lydic was medalist with her 36. Brockstedt posted a 39, with Piperno at 43 and Dostal finishing with a 46.

Ethan Mercer won medalist with a 43 in his first time playing the Georgetown course. Jacob Gabbard posted a 45, second best for the Vikings. Tom Burn’s 46 and Dylan Steinwedel’s 47 completed the team scoring.

The Vikings took another road trip May 9 to play Odessa High and St. Georges Vo-Tech at Odessa National, site of this year’s state championship. Josh Freeman of St. Georges won medalist with his 36, but Cape won the team match on a rare 5th score tie breaker.

Odessa fielded three players and lost by forfeit to both Cape and St. Georges by the same score, 190-300.

The Kings Creek CC Ladies 18-Hole group played their 2022 opener May 5 using a Baker’s Dozen format. The 13 best scores are used to rank the players.