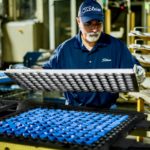 With a comparatively high profit margin compared to clubs, and with millions of golf balls sold each year, the ball segment is a major money maker for Titleist parent company Acushnet, headquartered in Massachusetts. According to an annual report from a few years ago, balls make up one-third of all sales. Acushnet reported over $1.6 billion in annual revenue in 2019, so this is not chump change.

For this year’s virtual PGA Merchandise Show, Titleist presented a virtual plant tour of its Plant No. 3, in New Bedford, MA. The video focused on the new ProV1 and ProV1X, its top-selling and highest-price balls. This plant makes all of them as well as the AVX model.

The video went through the production steps from conception, initial design, testing, retooling molds, and the eventual manufacturing process. Fans of the How It’s Made TV series would love it. 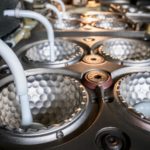 In the video, Mike Madson of Titleist’s R & D group described the challenge: “As we say, it’s easy to make one, it’s harder to make a hundred, it’s really hard to make a million. So, any change that we put into the golf ball we have to make sure that we can get that into the plant, and we can make a quality golf ball over and over.”

The 2021 versions of the V1 and V1X are a complete redo. Each element was reviewed for potential improvement while enhancing overall performance.

Titleist changed the chemical makeup of the core rubber segment to soften it. The rubber compounds are first formed into sheets. Pieces for each ball are cut from the sheets and fitted into molds for pressurized heat treatment into rounds.

The next element, called the casing, features what Titleist called a “higher flex modulus.” The resin/plastic mixture is a bit harder than prior models, and better resists the stress of compression at impact with the clubface. It also protects the rubber core from impact as well as moisture.

The injection-molded urethane covers are upgraded in two major ways. The compound is softer, creating higher spin for wedge and approach shots to the green, as well as a softer feel on putter impact. To improve flight characteristics, Titleist also revamped the dimple designs – 388 for the V1, and 348 for the V1X model. 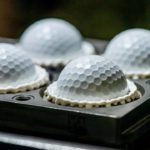 Significant costs come with remodeling. The company performs its own tool and die work adjacent to the plant, which for the V1 and V1X meant creating 70,000 new cavities to create the balls. Other requirements included meeting precise viscosity and temperature requirements during the manufacturing process. When the two halves of the urethane covers are fit together, they must also match their performance characteristics.

Titleist is known in the golf industry as a leader in quality assurance and controls. With this video, Titleist attempted to show the level of commitment it takes to keep that reputation, while also marketing their two best-selling golf balls.

And at $50 per dozen, one can understand why the company might take that approach.

Danish shoemaker ECCO announced an upgrade of its BIOM Hybrid line to coincide with this year’s virtual PGA Merchandise Show.

Jesper Thuen, the general manager of ECCO Golf USA, said the casual footwear company prefers the term “Hybrid” over “spikeless,” which is what most golfers call this style. 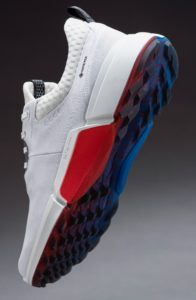 “Hybrids are now 50% of the golf market,” he said, adding that their “versatility for off-course” use is a major element of the shoe’s appeal.

The new BIOM H4 incorporates several changes from the H3, discussed here in March 2019. The prior model used yak leather, but the company switched to calf. Thuen said the change helped with color retention and long-term fit. “It’s also easier to clean and maintain,” he said.

Thuen also stressed the alterations to the outsole, included a significant use of TPU material. “It never loses its memory, and it enhances stability,” he said.

BIOM is a reference to biomechanical, a shoe-fitting goal for the company and reflected in what he called FluidForm technology. This technique molds the uppers and the outsole into a one-piece unit, without glue or stitching. “It creates a watertight seal,” Thuen said.

A GoreTex membrane fits inside the leather uppers, adding waterproof protection. A separate leather segment is used as an internal wrap from side to side for what he called a “locked-in feeling.”

This soles on this year’s model also use hardened materials in some locations such as the heel. Thuen said this change addresses the shoes’ off-course use. Concrete or other hard surfaces produce wear more quickly.

The H4s retail for $200, in four color schemes for men and three for women.

Thuen said the company experienced “growth benefits” during the pandemic, as golf increased its rounds. He also said their bookings for the coming year have already exceeded their expectations.

ECCO shoes are available at the Tanger Outlets on Route One, as well as from private club pro shops and large golf retailers such as the PGA Superstore.