An unusual scoring situation tripped up the Cape Henlopen High School Golf team in losing to Sussex Tech’s Ravens at The Rookery on May 5.

The two teams were tied after counting the usual top four players for each squad, 159-159. Under the current rules, that means that the score of the fifth player for each team counts. Alex Hatter’s 48 was three strokes higher than Tech player Eric Pisapia’s 45, keeping the Ravens unbeaten streak alive and producing the Vikings’ second loss of the season against 10 wins.

Hatter was still a bit steamed about his performance several days later. “I had a literal fight with three holes,” he said. “I tripled the seventh and doubled the ninth. I think I had one par in there somewhere.”

The top four Vikings played close to their averages. John Purple had a one-over-par 37, Andrew Schneider had a 38, and Jason Hastings and Travis Parker both shot 42 for the day.

Fortunately, the Vikings bounced back in their last two matches of the season.

On April 10 they traveled to Jonathan’s Landing in Magnolia, and beat host Polytech 146-152 on the par-33 front nine.

Schneider shot a 34 for one of his best rounds of the season. “I had all pars except for a bogey on 8,” he said. 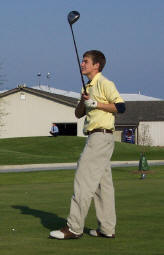 Jason Hastings grimaces as he watches his tee shot on the first hole at Rehoboth Beach Country Club, during the May 11 match with St. Thomas More.

Purple had no birdies in shooting 38, just a string of pars and two bogeys on 2 and 7.

Parker took second for the Vikings with a 40, with only a flubbed sand shot on the ninth hole keeping him from breaking into the 30s for the first time ever. “It was on an uphill lie, and I just came down too steep on it. The ball landed in the sand and rolled back into the divot,” he said.

Hastings said he had a “lot of pars in the beginning” of his round. Two doubles and two bogeys contributed to his 42.

Schneider had three doubles to help push his total to 43, but he also nearly had a hole-in-one on the par-3 5th hole. “It was two inches away. Nice to have that kind of tap-in,” he laughed.

The Conference tournament is next, to be held at Sussex Pines May 25.

Something odd is going on at Shawnee Country Club this spring, with two more holes-in-one just in the last week. That’s four aces since mid-April for the Milford club.

Lisa and Brian Distefano of Wilmington are related to the Popovich family of Lewes. Brian came down to Shawnee to play in the season-opening event of the Delaware State Golf Association on May 4. The 41-year-old member of Delcastle hit an 8-iron toward the 147-yard par-3 ninth hole, but a small rise kept him from seeing the actual pin location. The ball found it anyway, for DiStefano’s first hole-in-one in 30 years of playing golf.

His proud wife made sure we learned about his accomplishment.

Part-year Lewes resident George Merchant teamed up with Tim Gallagher in Shawnee’s Senior/Junior Tournament on May 7. Merchant, 60, showed Gallagher how it’s done with a pitching wedge on the 114-yard par-3 13th hole. “I hit it solid, but the hole was tucked in behind the front trap. The ball hit the green and spun left, and we lost sight of it,” Merchant said.

Brian Lord, who was playing with the pair, reached the green ahead of the others and found it resting comfortably in the bottom of the cup.