Some golf books have a unique and ready-made audience. 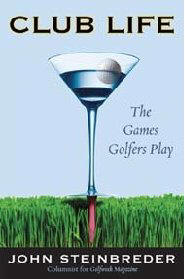 For Club Life: The Games Golfers Play, John Steinbreder’s compilation of his sharply written columns for Golfweek Magazine, that subset is found among those who play at private country clubs (Taylor Trade; $19.95 SRP). It’s especially appealing for those masochists who serve on their club’s board of directors, or worse, who are voted in as club president.

As a past club president, and now-happy alumnus of that group, I can easily vouch for this assessment.

The initial impression is that this longtime golf writer somehow found a way to sneak onto our club’s property and watch us all for an entire year. How else to explain the remarkable similarities between the antics Steinbreder describes and what goes on at my place?

The answer is easy—the golfing personalities we see or endure at our local clubs are usually mirrored at all of the other clubs, too.

For example, in one funny piece Steinbreder discusses how club presidents find themselves approached by members not only on the course, but also at supermarkets, restaurants, and gas stations. Sometimes, that’s “approached” as in “accosted.”

I laughed out loud when I read how a club president Steinbreder knew used my tactic of shifting my regular playing time to a dead zone, such as Sundays at 2 p.m., just for the chance to play a quiet round.

Steinbreder has his own, strongly held convictions about proper club management, honor, and decorum on club property. Some might even think these attitudes are bit old-fashioned, and insufficiently “sensitive” to others.

Steinbreder has the natural, appealing conservatism of a man who loves this game, knows what makes it great, and, more to the point, knows how boorish behavior can ruin it for the rest of us. The fact that he resorts to pungent prose in describing these truths is an added bonus.

If he’s as open with his opinions while playing, I’ll bet his regular partners often say, “Don’t hold back, John. Tell us what you really think.”

I especially liked this passage, in which he describes three types of Rule Benders:

“First is the longtime club member who feels he has been around for so many years that none of the laws and tenets applies to him anymore. Then, there is the newcomer who is so wealthy, arrogant, and self-absorbed that he doesn’t think any rules apply to him. Finally, we have your basic rebel, the golfer who can only take so much authority and feels he is not really living if he is not crossing the line in some way, shape, or form.”

Without naming names, I can think of folks who meet these descriptions at more than one Cape Region country club.

Steinbreder’s preferred solution is for clubs to have a not-so-benevolent dictator run the place, with full power to terminate memberships as necessary. That seems a bit much, although I can admit the idea has its appeal, and was even more appealing as I was finishing my second year as club president.

This slim volume is certainly not centered on the dark side of club golf, however. The first essay after the Introduction, “What Makes a Club Great,” is a thoughtful appreciation of the deep-rooted appeal of a well-run golf club. It’s a bit old-fashioned (tiny little white scorecards are nice, but not essential), but the essay’s main points will appeal to most club golfers’ sense about why they join in the first place, and then remain for decades.

There’s a funny and very true segment on handicaps, and how golfers deceive themselves or others about their actual abilities. Steinbreder also addresses the Augusta National/Martha Burk controversy, and his views and mine are completely in sync. He’s also very, very funny when it comes to the various sins against fashion often committed at these clubs.

The best part of this book, however, is the clear, distinctive, assertive voice you hear as you read it. You may not agree with everything Steinbreder says about country club life, but you will love how he says it.

Some day I should invite him down here for a round.