Ron Schenk knows how to make a pitch.

He also knows how to score, in business and in golf. Now he’s decided to share some of that knowledge.

For much of the year, Schenk enjoys his home near the 7th hole at Kings Creek Country Club, just outside Rehoboth Beach. In 1987, the Georgia Tech graduate started his career as a sales representative with IBM. Eventually he and a partner decided to take advantage of a software business opportunity. They left IBM and started off on their own.

After several years of hard work, the software business began to show real promise. Shortly thereafter, Schenk faced another opportunity, when he was presented with an offer to sell the business. Once again, Schenk seized the moment.

At the ripe age of 34, Schenk found himself a former business owner with “time and a little money on my hands.”

“Selling the business was a little like taking off a wet suit. At first I didn’t even realize how much I needed to decompress from all the work and time I spent building it up. Fortunately, the sale enabled me to relax for four to five years, and spend time on my golf game,” Schenk said. “I became a single-digit handicapper.”

“I was proud of my accomplishments, and started thinking about how I managed to reach my goals. What decisions did I make that led me to my success? After a while, it hit me that a lot of what caused my success in business also explained my success in golf,” Schenk explained.

“Whatever you are going to do, you should make sure you bring passion into your work. I decided to write a book that golfers and others could use to learn how to bring that passion into their games and their work.” 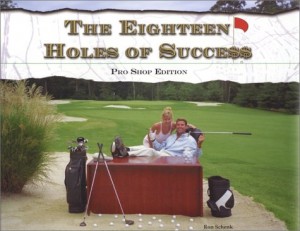 The Eighteen Holes of Success

After three years, Schenk finished his effort. The Eighteen Holes of Success ($35-$49 SRP) is now on sale at Browseabout Books, Nassau Gallery, and Creative Impressions in Rehoboth, as well as local golf pro shops throughout the Delmarva Peninsula. In addition, Schenk said several businesses are buying multiple copies for employees and as corporate gifts.

As he worked on his book, Schenk kept up his golf game. He adopted a new goal, of passing the Professional Ability Test (PAT), in which prospective PGA members must score no more than 15 shots over the course rating in two rounds.

After seven tries, including a memorable hole-in-one during one round, Schenk passed the test in his final opportunity of the season.

“I attempted the PAT because I needed to add credibility to my golf presentation in the book. It was my first taste of real competition, and I was scared to death during that first test. I learned something each time I took the PAT, and passed it one day before the book was completed,” Schenck said with a smile.

At a December book signing at Browseabout Books, accompanied by his wife Bethany, Schenk described his book and its themes.

Schenk said his personal favorite chapter is the eighteenth, on honesty, and he has a point. It’s a nice collection of thoughts on the benefits of being honest and the penalties for choosing a different path. The first part deals with honesty in business, such as negotiating in good faith and trustworthiness in customer relations. The second part discusses the benefits of playing an honest round of golf.

The book is a major step in Schenk’s plans for his next career move, public speaking before business and professional groups. As he put it, “Let your mind believe it can be done, and it will be done.”