A summer or two ago, at a Rehoboth Avenue tee shirt shop, I saw a human billboard in 100% cotton that proclaimed, “Golf is not Life. It’s much more important than that.”

There may be some who actually believe that statement. For most golfers, however, their favorite sport is simply a pleasant part of a life well lived.

Ray A. March helps prove the point nicely in Two Bites of the Cherry and Other Golf Stories, (Carmel Publishing, $19.95 SRP). 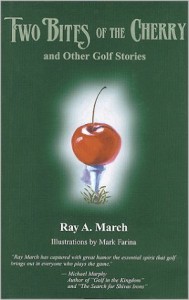 Two Bites of the Cherry and Other Golf Stories

March is a seasoned journalist and the former contributing golf editor for the Robb Report magazine. Many of the twenty-three pieces in this book were previously published there or in similar outlets.

Several stories stand out in the book. For example, in “Wines between Nines,” March describes a golfing trip to southwest France. For French golfers, a good lunch is apparently at least as important as a good score. March himself is as adept in describing the wines as he is in writing about the courses he played.

I enjoyed the two segments that recounted March’s interviews with rock’n’roll star Alice Cooper and former astronaut Allen Shepard. One would be hard-pressed to name two other people who had less in common. March shows in these stories how their mutual love of golf makes them more alike than either would have known.

In 1986, March followed along with Tom Watson, Frank “Sandy” Tatum, and Robert Trent Jones, Jr., as the three men walked their new course, The Links at Spanish Bay. As the course nears completion, March nicely captures the three different personalities at work as they argue and compromise their way to an eventually wonderful Pebble Beach golf course. Those who have played Spanish Bay will have a deeper appreciation for what went into its creation, after reading this story.

March’s family stories are charming. In “Rambo Golf,” March notes that “To play golf with two grandchildren, age eight and six, is not to play golf at all.” As the piece shows, the fun time together as a family is the important point. I finished this piece wishing it were several pages longer.

Those once from or now living in small towns (such as Milton, Lewes, or Rehoboth Beach) will recognize their own little places in “Anywhere, America.” March and his wife make a stopover at Placerville, California, thinking they will play a little 9-hole course on their way to their ultimate destination.

Once they learn the town is having a parade that day, they immediately set aside their golf plans. The couple have a great time during the parade and thereafter, and are further charmed when they see the little course they never actually play. This doesn’t keep March from mentally trying out his technique on part of the course, a daydream nearly every golfer experiences.

March is a native of the Carmel area of California, and several pieces take advantage of the fact he still lives there. “The Greatest Coach Carmel ever knew” is a moving tribute to George Mosolf, for decades the Carmel High School coach and the driving force behind the Carmel Youth Center.

March also knew the Jenkins family, who owned the property that is now the par-3 fifth hole at Pebble Beach. It’s safe to say that March is not enthralled at the change in the Pebble Beach landscape since the new hole’s construction, as detailed in “The Name of the Game.”

In essence, Two Bites is a pleasant compilation of stories about people. Golf just happens to be the common thread that weaves together the many different tales that make up the collection. For those who recognize golf’s actual relative importance in life, March’s work will re-affirm their view.