Somebody once said that the makers of golf balls and golf clubs don’t really sell equipment.

Not that there’s anything wrong with that, of course. 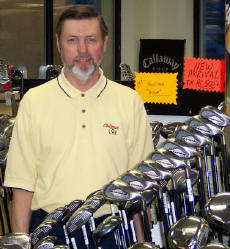 Here in the Cape Region, the folks at Clubhouse Golf just outside Rehoboth Beach are the area’s leading marketers of hope. I had a long chat recently with Boyd Russell, one of the popular store’s staffers, about the new items on their shelves as the season begins.

“We have a lot of the new stuff in already, and we’re expecting more shipments in the next week or so,” Russell explained.

Among the drivers, the Calloway and Taylor Made lines are big sellers at Clubhouse.

This year’s leader for Calloway is the Great Big Bertha II, a titanium blaster retailing for $399.95. “It’s a tweaked version of last year’s VFT line,” Russell said. “They all have variable face thickness, and all meet the USGA rules about ‘spring-like effect’ that one of their prior models didn’t conform to. The fairway woods in this line are all titanium, too.”

Taylor Made is also selling an updated version of its Rescue Club, first made famous when Senior PGA Tour player/announcer Gary McCord used one out of the rough for a rare tournament victory. The utility clubs are intended to replace low-number irons with a more forgiving design.

The Taylor Made irons and wedges are called RACs, with graphite shafted sets priced at under $900. Steel-shafted irons are a couple hundred less.

Among other lines at the shop, the Cleveland Launcher 400cc driver has a huge deep face. It also uses titanium to entice the duffer looking for more distance off the tee.

The putters at Clubhouse are fun to shop for, because there’s a two-hole putting green for quick feedback as one tries the different styles.

Russell said the Odyssey White Hot 2-Ball putter is incredibly popular, even with the $169 price tag ($199 for the belly version). “They say that the 2 white circles behind the club face make it easier to keep the putter on-line, and the fact that so many pros are using the putter always helps,” he noted.

In addition to the other Odyssey models, the store also carries a long list of other putters, including the Rosa group from Taylor Made, Pings, Nancy Lopez, Kathy Whitworth, and Square Two.

The golf ball market is also incredibly competitive, with many different brands and models, according to Russell: “The four most popular balls we sell here are the Maxfli Noodle, the Precept Lady and Laddie models, and the Titleist Pro-V1. The Noodle [$19.99 doz.] is a very good ball for the average player, and we sell an awful lot of them. The Lady Precept [$21.99 doz.] is very good for distance, and the Laddie [$24.99 doz.] has a little softer characteristic, for more spin. And the Titleist Pro-V, well, they sell really well for golfers who are willing to spend more [$44.95 doz.].”

As a short visit to Clubhouse will confirm, there are plenty of other golf items for sale, including gloves, shoes, and clothing. The store also provides re-gripping and other services.

Over the next several weeks, Russell and his fellow salesman hope to keep busy helping Cape Region golfers build up their hopes for the new season.