Changes in the landscape at Old Landing Golf Course

Rob Marshall is a tree-hugger.

That doesn’t mean he won’t cut down a few hundred of them for the sake of his golf course.

It just means he’ll find better places to plant new ones, where they’ll be more compatible with golf.

Marshall is the owner-operator of Old Landing Golf Course, at the foot of Old Landing Road. His layout is the oldest 18-hole public course in the Cape Region, on about 150 acres in a park-like setting. 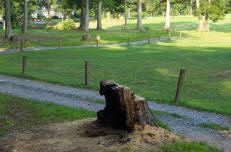 Several stumps sit behind and on the sides of the third hole at Old Landing Golf Course, outside Rehoboth Beach, Delaware.

Golfers who have not played Old Landing lately would be surprised at some of the changes Marshall made over the past year, including the removal of over 400 trees. For example, the space between the greens for the fourth and 13th holes used to be tree-covered. Now it’s an open area, and the surrounding turf looks far better than it once did.

The actual number of trees he removed seemed to surprise Marshall himself, as he totaled them up when we discussed his recent renovations.

“Years ago, I wouldn’t cut a tree. Trees are wonderful. But I learned they shouldn’t be anywhere near a green or a tee box. They shouldn’t even be close,” Marshall said.

A few years ago, Marshall tried an experiment with the tee box area for the 15th hole. That spot would traditionally lose its turf before half the summer was over, and someone suggested there were just too many trees around it. Marshall cut the trees down, and the turf stayed healthy.

He continued that concept at several other places around his course. Where a swath of trees once stood, separating the greens for the 12th and 14th holes, there’s now a broad stripe of green grass instead.

“We took out about 80 trees in that one spot alone,” Marshall explained. “We ground out most of the stumps. They were mostly oaks and gums. You can see the difference on the greens themselves. The turf is really healthy now.”

Near the third hole I could count at least 13 stumps partially encircling the green, and 9 stumps were adjacent to the tee box for the 17th hole. All told, Marshall figured he removed at least 150 trees from the greens and tee box complexes, with the additional 250 trees taken from other portions of the property.

“I’ll be putting in new trees elsewhere as we go. They divide the fairways, and give walkers some handy shade in the summer when it’s hot. Even so, sometimes a tree has got to go. One sales rep took a look at what I’ve done and said I could easily take out one-third of the trees along the fairways such as on [hole number] fourteen.”

Marshall hasn’t limited his improvements to increasing his firewood inventory. For example, he is installing new drainfields on several holes, such as in the fairway of the thirteenth hole.

This field runs for 80 yards, ending about 40 yards from the green. It’s set up in 9 rows six feet apart, in trenches 10 inches wide and 2 ½ feet deep, and filled with drainfield stone. The topsoil and turf are then placed above the field, and the design removes excess rainwater away from the grass with startling efficiency. Marshall plans to install an additional drainfield on that hole soon, and to place a couple more drains shortly thereafter on other holes.

Marshall also changed his turfgrass on several fairways, to Tifsport Bermuda. He placed the sprigs on four holes the previous summer, and on five more fairways in May. “It looked pretty bad at first when we put it in. But by this July, it came in really well. I’m pleased with its progress so far. Next year it should be close to full.”

Trees and turfgrass compete with each other more than most golfers realize. Marshall’s experience shows that with proper planning and the occasional judicious use of the chainsaw, both can be vital parts of a beautiful landscape.