Most golf memoirs are written in a light, breezy style. After all, the central focal point of such books is a disarmingly simple game. 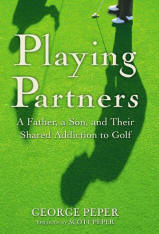 On the other hand, George Peper’s Playing Partners (Warner Books, $24.95 SRP) is one of the most bluntly worded, introspective golf books I have ever read.

Peper uses such direct language about his childhood, his marriage, his family, and himself that writing this book must have felt cathartic. Letting the rest of us read it, however, is a bit surprising—well worth it, but a little startling.

For example, not many golfers would admit to being as self-absorbed as Peper describes himself, especially in the first half of the book. Some passages will produce winces of self-examination and recognition–Am I as selfish about golf as he was? Do I excuse my golfing absences from my family as my deserved reward for being the primary breadwinner? What memories will my kids have about their father?

Peper decided as a young adult that he’d be far more directly involved in parenting than he recalled about his own father, a busy chiropractor already middle-aged when Peper was born.

It’s only later in life that Peper learned of his father’s deep pride in his son’s accomplishments, expressed over many years to his patients and friends.

For some reason, it was easier for Peper’s father to talk about his son than it was to talk to him. This memory may sound familiar to many middle-aged readers.

Peper also seems to realize that he was only partially successful in adopting a different approach to parenting than he first planned. He also gives several examples showing how his wife Libby’s interactions with their two boys were frequently the mirror opposites of his own.

Peper deeply loves and appreciates Libby. He recognizes she was right when she would blow up about his absenteeism or self-centeredness, especially relating to golf. On the other hand, he doesn’t mince words in describing what he sees as her mothering by smothering.

Peper’s older son Tim tried his hand at golf, but did not take to the game as Peper hoped. He also tried other sports, with occasionally limited success. The story of Tim’s Little League tryout, as told in the book, is a particularly painful episode. To his credit, however, Peper locates the source of that disaster in himself, not Tim.

Much to Peper’s joy and delight, his younger son Scott discovered he loved golf as much as his father.

Scott is in many ways a classic example of the mystery that frequently confounds parents with more than one child—how could two people produce offspring with such different personalities?

Peper learns by fits and starts how to nurture Scott’s interest in golf, without crushing it with his own enthusiasm.

The book nicely describes how Scott eventually improves beyond Peper’s own elevated skills at the sport. In their mutual love for golf, the two also found a way to grow and deepen their relationship as father and son. In addition, the experience helped Peper learn how to be a better father.

Peper’s own life underwent several recent major changes. Scott entered college as Tim graduated and began his own career in the arts. A double hip replacement suddenly reminded Peper of his own mortality, and his successful recovery from the surgery had its own effects on golfing with his son. In addition, he’s no longer part of Golf Magazine’s management, and now lives with Libby in a house they bought years ago, set along the 18th fairway in St. Andrews, Scotland.

Writing this book seems to have triggered a potentially beneficial interlude for Peper, in which he took stock of his life as a father, husband, golfer, and writer before moving on to the next stage.

Peper’s self-appraisal, detailed with searing honesty throughout this book, may convince others to do the same. For golfers juggling families, careers, and this sometimes all-consuming sport, re-assessing one’s behaviors and goals could be a very good idea.