The volunteers who help George Washington University golf coach Scott Allen host the match at Kings Creek Country Club are a big part of the reason for the tournament’s success, in both its spring and fall editions. 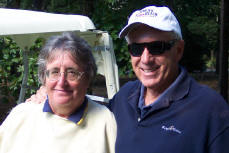 The leaders of the pack are Coach Allen’s parents, Ron and Sue, members of the club and residents of Kings Creek.

They recruit nearly twenty friends to help shuttle the golfers over some of the longer distances between greens and tee boxes. Others are spotters for some of the more difficult locations, such as the par 5s on the second and sixteenth holes.

“We use about ten volunteers for the morning round, and another ten for the afternoon round,” Sue Allen explained. “Many of them have been doing this since the first tournament. Everyone seems to have a good time.”

Ron Allen said, “The members love seeing the kids playing here. We’ve been told that’s not how it is at some other courses they play.”

Ken Diggs shuttled players between the first hole and the second tee. “This is fun. The kids are saying the course is a real challenge. Most say that the golf course is winning, but some are doing very well.”

Bill Regli and Art Shelley were spotting on both sides of the second fairway. “The kids are great. They always say thanks as they go by, but they don’t like this hole,” Regli said.

This year, Lucky Regli took the golfers from the fifth hole to the sixth tee. “Some of the kids have played in the tournament since its beginning. They’re seniors now, and they told me they remember me from the last times. They love the course, and they ask us about how we play it.”

John Groll had cart duty between the seventh hole and the eighth tee. The former Canada Dry executive was impressed by the talent among the college golfers, as well as some other qualities he noticed. “They’re super kids. They’re so polite, always thanking me for the lift. They’re fun to watch, too. They were making some long putts.”

Rudy Blancke was spotting on the 16th hole, and saw something he’d never seen before. “One kid hit a shot and the ball landed high in the tree and stayed there. I felt like an idiot, because I saw it go in the tree but couldn’t see it. It must have been up there for 3 ½ to 4 minutes. Then the wind came up, and boom—it fell out of the tree and into the pond. He ended up with a bogey. Most of them were playing it well, though–lots of birdies, and a couple eagles.”

Clyde Benjamin helped out near the 17th tee box. The LaCrosse, Wisconsin resident is visiting the area, and volunteered to help when his brother George’s illness prevented him from helping out during the tournament. “These kids are amazing—wow, can they hit the ball,” Clyde said.

Frank Derville had cart duty between the 10th and 11th holes. “They like the course, but it’s not easy. They say it’s challenging. On this hole, almost all of them were using irons off the tee, and just about every one of them was on the green in regulation. They’re a good bunch of young men, very courteous. They’re very deliberate as they play, though.”

Some of the other volunteers include Gene Musi, Frank Nerville, Bob Vanderloo, Ed Broderick, Dave Bradley, and Gene Bender.

Along with the rest of the crew, they look forward to helping out with the next tournament in the spring.