Rick Reilly came up with a nice idea, and then executed it well.

That doesn’t happen all the time, so it’s worth noting the accomplishment.

In this case, it was a variation on a theme first developed with great good humor and wit by the late George Plimpton—if you really want to know what it’s like to be in professional sports, then be a sports professional, if only for a short while.

Reilly is a long-time sportswriter for Sports Illustrated. He is well known for not being shy in expressing his personal opinions about professional athletes. It’s among the reasons he’s kept a popular column on the magazine’s back page for so many years. 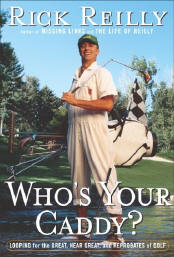 In his newest golf book, Who’s Your Caddy? (Doubleday, $24.95 SRP), Reilly notes that one of the major differences between golf and any other sport is the close presence of a caddy during the event.

Reilly recognized that a book limited to describing what it’s like to caddie for touring professionals would have its limits. Besides, golf appeals to an immensely wide range of people, some of whom are celebrities in a far different arena than between the first tee and the eighteenth hole.

He therefore decided to expand the field of those who might accept the dubious distinction of having an SI sportswriter caddy for them.

Reilly was just dogged enough in making his requests that he ended up with a fairly startling assemblage of golfers.

I doubt very much if any other golf book would include the opinions of Tommy Aaron, Deepak Chopra, Casey Martin, Donald Trump, David Duval, Bob Newhart, and John Daly.

In fact, I doubt very much if any book would include that combination.

Reilly carries it off, with far greater skill than he admits he brought to his caddying career.

Here’s a secret—almost all writers possess, shall we say, a healthy ego. Golf writers are certainly not immune to this characteristic. So, when Reilly goes into great and gory (and very funny) detail about how he frequently screwed up the allegedly simple caddie tasks of showing up, keeping up, and shutting up, readers should appreciate the self-deprecation.

Reilly is also very good at using his powers of deft description to round out the characters of the golfers he allegedly assisted, as well as others he met along the way.

Tom Lehman and Jack Nicklaus are devoted family men, who act on that devotion in much the same way. Bob Newhart is a better golfer when he plays alone than when he plays with others, which for some folks mirrors the way they feel about his comedic performances.

Jill McGill is a poster child for an age-old truth that highly talented performers are not destined for a uniformly happy existence. Donald Trump is exactly as he appears in his public persona, which is not necessarily a good thing. Bob Andrews, an accomplished blind golfer, understands how to enjoy life as it happens.

In addition to the fine character studies, I also thoroughly enjoyed the segments Reilly used to end most of the chapters. He writes a passage about a golfer’s performance as a tour caddie would describe it, followed by a Margaret Mead-like translation in extremely formal English. These passages are often inappropriate for exquisitely sensitive readers, but are brutally funny for the rest of us.

There are good reasons why Rick Reilly has been recognized as one of the country’s best sportswriters. For those who haven’t yet realized that fact, this highly entertaining book might help them understand.