As the weather improves, Cape Region golfers start thinking about the upcoming season, and the sporting goods manufacturers are ready. 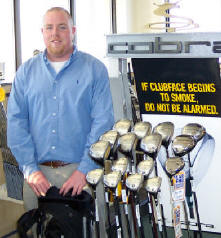 Pete McCaffrey and a stand of new Cobra clubs

Pete McCaffrey of Clubhouse Golf recently discussed some new golf balls and clubs that are now available or soon will be.

“Probably the best top-of-the-line golf ball out there right now is the Titleist Pro-V1,” he said. “It’s $45 [a dozen,] and for the better players there not much out there that can beat it.”

McCaffrey, who is also the golf coach at Delaware Technical & Community College Owens Campus, hits a long ball. He says that at high swing speeds the differences among golf ball designs is more noticeable than for those of us with average or slower swings. “Most golfers don’t really see the benefits of the higher-end balls,” he said.

For example, Titleist sells an even more expensive ball, called the Pro-V1 X ($49), which McCaffrey says is similar to those used by PGA Tour players. “It goes off the clubface a little hotter than the Pro-V1, and launches off the driver a bit higher. I noticed it would go a bit farther than when I hit the Pro-V1,” he said.

McCaffrey said most golfers would be fine using the Titleist DT Solo model. “It’s a lower compression ball, and would be good for most of the golfers out there.” At $23 per dozen, the DT Solo is also a bit easier on the wallet.

Top-Flite, the second-largest golf ball seller after Titleist, went bankrupt a while ago, and Callaway Golf bought up its assets. McCaffrey said their new Infinity ball is the company’s “most-ball-for-your-money line. It’s designed for your average golfer.” The Infinity model retails in the low $20s.

Later this year Callaway will send out three new golf ball designs, under its own name. The new HX model is the top-line model, a 3-piece design that uses hexagonal dimple shapes on the cover. The middle-grade balls are called Big Berthas, just like the golf clubs that launched Callaway into the marketing stratosphere. They feature both a soft core and a soft cover. The low-end ball is the Warbird line. McCaffrey says that the Warbirds are sold as “distance” balls, but “they have a pretty soft feel, though.”

Titleist’s low-end golf balls are marketed under the Pinnacle label. This year’s version, the Exception, is extremely similar to Titleist’s mid-line NXT brand, and sells for $16.99. McCaffrey says that’s largely due to the fact that this year’s Exception is last year’s NXT.

The Never Compromise Voodoo putter features weights at the heel and toe, to increase the face-balancing and resist twisting on impact. In addition, a special heavy weight in the back center of the club is intended to help the ball begin rolling as soon as possible after impact, compared to the skidding that usually begins most putts. The milled face in the center is made of aluminum, and they sell for $135.

McCaffrey said the Odyssey 2-Ball line has been a best-seller for the last two years. The putter wouldn’t appeal to traditionalists, since it has two large golf-ball-sized discs leading back from the front edge. The disks supposedly help with alignment. This year’s model includes a black insert on the face that’s a little harder than last year’s white-faced model. It retails for $169.

Ping now offers the G-2 putter, which includes an insert on the club face. As with most such designs, the insert is intended to give a softer feel at impact, especially for golfers using a hard-cover ball.

McCaffrey also recommended a few other club lines. He likes the Cobra SS-I irons, a strong seller in golf shops at $449/set with steel shafts, as well as the Nike CPR long iron replacement clubs. The CPR stands for “Clubs for Prevention and Recovery,” which considering their intended uses makes perfect sense.