The Cape Henlopen High School golf team’s continuing success is beginning to be noticed by the upstate sports establishment. 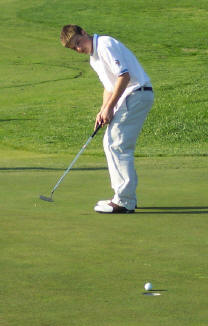 Jason Hastings watches his par putt roll to the 9th hole at Rehoboth Beach Country Club during a recent match.

The Vikings are now ranked ninth among the state’s varsity squads, with two more matches scheduled before the Conference Tournament and two-day State Championships in early June.

Meanwhile, the victories continue to add up.

The Vikings had a fairly easy time of it against Polytech on May 5, beating the Kent County squad 170-190 in a home match at Rehoboth Beach Country Club.

Brett Hertel led all players with a 40, including a fine birdie on the par-5 9th hole. His 5-wood second shot from over 200 yards out bounced off the back of the green to a spot almost two yards into the rough. Hertel then made a great chip shot that rolled slowly down to a spot 2 feet above the hole in the front third of the green. The birdie putt rolled in nicely.

Jason Hastings fired a 41, one of his best scores of the season. John Purple shot a 44, which he attributed to a case of short-siding on his approach shots. Kurt Stephens and Andy Lee tied for fourth-best with a pair of 45s.

On May 4 the team squeaked past Sussex Tech at Rehoboth Beach CC, 184-186, in windy conditions.

Hertel’s 41 qualified for medalist status, but he wasn’t pleased. “I putted like crap,” he said bluntly. A birdie on the seventh hole, helped by a “little punch sand wedge,” was accompanied by pars on four other holes.

Hastings said his 47 was “not good. My driving was off, and the rough was pretty thick.” He parred the 7th hole, but doubled 8 when he drove under a tree and had to pitch out. His triple bogey on 6, caused by a drive into the pond, also didn’t help.

Andy Lee chalked up his 47 to the occasional duffed chip and some problems with concentration.

Davidson had a wild round for his 49, with two 9s, five pars, and a double bogey. “On 8, I couldn’t get out of the rough. It just stayed there. Eventually I had a routine two-putt for a 9.”

Sophomore Alex Hatter played his first varsity match, but wasn’t pleased with his 56. Even so, he managed to grin when his teammates applauded his final putt on the ninth hole.

The Vikings beat Sussex Central in another home match April 29, 169-237. Hertel took medalist honors with a nice little 37, one over par. “That was with a two-stroke penalty, too. Purple and I each used the wrong ball on the eighth hole, so we had to go back and hit again from where we got mixed up. I hit a shot 190 yards to 2 feet for a 5.” His round also included a birdie on the second hole.

Davidson went low with his 40. “I’m starting to play my game. I hit 7 of 9 greens in regulation, and birdied the 7th hole.”

Jason Hastings contributed a 45. “I bogeyed the first five holes. On each one I had 10-foot putts for par, and missed all five.”

Thanks in part to the two-stroke penalty, Purple finished the team scores with his 47.

On April 27 the team traveled to Maple Dale Country Club and easily handled Smyrna on the par-36 back nine, 158-195.

Purple led all scorers with a three-under par 33, with Hertel’s 38 taking second place overall. Hertel said it was his best score “on the road” in a high school match, highlighted by a near-eagle on a par 5.

Kurt Stephens played his best round of the year with a fine 43. “I had four pars, 2 doubles, and 3 bogeys,” he said.

The team plays St. Thomas More and Dover May 17 and 19, with the Conference meet on May 25 at Cripple Creek Country Club. The State Championship is held this year at Sussex Pines on June 1-2.

Cape Region golf fans who’d like to support the team now have a chance to do so, with the purchase of “Cape Golf” decal stickers for $10. The money will help offset team expenses such as balls, bags, and shirts.

Send a check made out to Cape Henlopen High School and your name and address to Coach Groll at 1250 Kings Highway, Lewes, DE 19958, or contact one of the team members. They have a ready supply.

Rookery Golf Club’s Head Golf Professional Butch Holtzclaw recently announced a new program for juniors at the popular Milton area public golf course. Golfers 17 and under have unlimited playing rights from May 15 through September 15 for a single payment of $250. For more information, call Holtzclaw at 302-684-3000.