Metz has his greatest shot at a great golf course 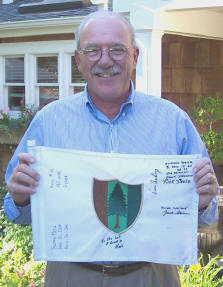 Tom Metz displays the 14th hole flag he received after making a hole-in-one at Pine Valley on June 30.

Tom Metz made his second hole-in-one even more memorable than his first.

The Lewes resident plays to a 10 handicap at his home course at Rehoboth Beach Country Club, where he scored an ace several years ago.

The New Jersey golf course near Philadelphia is regularly rated among the best layouts in the world, and Metz could barely contain his enthusiasm as he described his experience.

“It was just unbelievable,” he grinned.

The 14th hole features a 180-yard carry over water from a slightly elevated tee to a sharply sloped green, with water behind the green and trees on both sides. “I hit a Titleist Pro V1 with my three-iron and it went right at the hole. It landed about five feet away and just stopped. Then it started trickling, and all of a sudden it just disappeared. I think it took 5 or 6 seconds. The caddie told me he’s worked there for 14 years, and this was the first hole-in-one he’s ever seen on the 14th. It was just a heck of a shot,” Metz said.

This delightful achievement at such a memorable location is just the sort of story that would have fit in nicely as part of a new golf book, My Greatest Shot, by Ron Cherney and Michael Arkush (Harper Collins, $19.95). 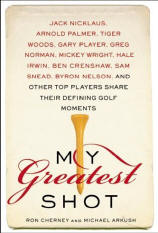 Cherney, a dentist and club champion at his home course in California, took the initiative to write to some of the game’s greatest players, both professional and amateur, and ask them two disarmingly simple questions–what single shot was your personal best? Or, even harder, what was the greatest shot you ever saw anyone hit?

Eventually Cherney obtained responses from well over a hundred famous players. Arkush joined the project a few years ago, and interviewed most of those who replied to Cherney’s letters. They selected the best 80 responses, and their combined efforts paid off handsomely.

The book includes an exact reproduction of each golfer’s written response, whether neatly typed or in occasionally shaky longhand. Many of them noted that the process of focusing on a single best shot wasn’t as easy as one might think. Several famous golfers described shots that will surprise many of their fans. In nearly every instance, however, the process of answering these two questions seems to have encouraged the players to reveal something of their character, as well as show some of the reasons why they love golf.

For example, Greg Norman’s short note about a scrambling shot off the stone wall at the Road Hole at St. Andrews is a great example of his willingness to dare greatly. Estaban Toledo showed how much a single shot can mean to someone trying to earn a spot on the PGA Tour during the Q-School tournament.

Jan Stephenson’s note gave a glimpse into the importance of family support for many professional golfers, with a story involving her father and a potentially winning putt in an LPGA major tournament. Notah Begay had no witnesses for his best shot, but the experience cemented his own love affair with the game.

Arkush’s short biographical notes and quotes from his interviews are equally revealing. Bob Toski explained how his family commitments led him to leave the touring life and focus on teaching. Kathy Whitworth credits Harvey Penick as among her greatest influences in making her one of the best women golfers of all time. Mark McCumber described how his own sense of family priorities affected his schedule for competing on the Tour.

The book is highly entertaining. It’s a bit like listening in on an animated conversation among golf’s best players.