This year Mike Connor celebrated his tenth year since graduating from Cape Henlopen High School. With only a couple detours along the way, the Vikings’ former No. 1 player has built an increasingly successful career in the sport he loves. 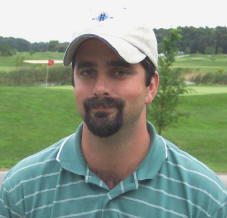 Mike Connor, the assistant golf professional at The Rookery near Milton.

His first detour from golf occurred in the fall of 1994. Connor spent a single semester at Mississippi State University. “The college scene wasn’t for me. I think there was some homesickness, too.” Connor then found a job at the Golf Down Under store in the Rehoboth Outlets. He also worked part-time for Ron Barrows at Rehoboth Beach Country Club, for whom he’d previously worked during summers in high school.

Ty Mayers hired Connor for his “first official assistant job” at Kings Creek Country Club in the spring of 1995. “I handled the outside employees, like the cart assistants, and later did some tournament management and merchandising. Later on I worked inside in the pro shop. I passed my PAT [Professional Ability Test] for the PGA in September 1998. Later that fall I left Kings Creek and went back to working for Ronnie for a little while.”

In 1999 Connor took his second detour from golf, this time at a car dealership in Seaford. “I quickly found out I’m no car salesman,” he grinned. Fortunately for him, David Jones soon offered Connor a chance to return to golf, working with Jones at the new Golf Park. Connor kept that position until Holtzclaw recruited him for The Rookery.

A typical day for Connor now starts a little after 6 a.m. “I handle the opening operations, getting the course ready for the day’s play, assigning the employees like the starters and cart attendants, and so on. Around 10 or 11 a.m. I often do lessons, usually 5 or 6 a week. The action on the course usually slows down after lunch until 3 o’clock or so, when the twilight golfers start showing up. It’s a pretty full day.”

Connor is responsible for setting up tournaments at The Rookery, as well as the design and arrangement of the pro shop merchandise. “Butch does the ordering, and I give him input.”

The PGA Professional certificate program takes six years, with two years’ of progressively more complex education and experience in each of the three levels of the program. Connor successfully completed Level I last fall at the PGA’s Learning Center in Port St. Lucie, Florida, and is now working on his Level II credentials.

Connor stressed a few points when asked to describe his approach to teaching golf. “When people come to see me, they know there needs to be changes, but I don’t want to be too technical. I want to explain why they hit a bad shot, and then make sure they know how to fix it. I want to keep it as simple as I can, and I’m a big advocate of the short game. That’s the most underappreciated part.”

He gave an example from his own playing history. Connor began his summer after high school with a 14 handicap. At the time he was thinking of enrolling in a professional golf curriculum at Mississippi State, but needed to bring his handicap down below 6 to be admitted. By working on his short game 5 days a week for two hours each day, Connor managed to bring his handicap down to 5 in that one summer. “Today, the strongest part of my game is still around the green.”

Connor brought his own handicap down to 2 last summer, but then tore a ligament in his left knee while playing basketball in Milton over the winter. His golf game slowly came back over the last few months, but he said it’s been slow going. “Needless to say, I’m not playing basketball this winter,” Connor laughed.