Witty way to remember the Rules of Golf

Dave Marrandette’s use of humor and wit in his new book, Can I Get a Ruling? (Clock Tower Press, $15.95) looks to be a pretty effective way for golfers to remember and apply the Rules of Golf. 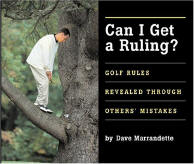 Can I Get A Ruling: Golf Rules Revealed Through Others’ Mistakes

Instead of a dry description of the Rules and how they work, he uses the power of parables.

There’s nothing like a colorful anecdote to show how a rule works, and there are plenty of examples from the professional golf tours to cover the typical incidents.

Chip Beck hit near an out-of-bounds stake, and removed the stake to clear the area for his next shot. Almost immediately he realized his mistake, but the damage was done, adding two penalty strokes to his score. Marrandette uses this story from the 1992 Greater Greensboro Open to cover the movable obstruction rules (it’s not), and also notes that the error cost Beck $81,563 in prize money.

I assume Beck hasn’t touched a boundary stake ever since.

Most of the chapters in this slender book cover a single basic part of the Rules, fleshed out with stories from the last fifty years or so. Several yarns will be familiar to long-time golf fans, but Marrandette manages to keep them fresh in the re-telling.

In addition, he explains how the rules have evolved, in part to address fairness or competition issues caused in part by the prior drafts. For example, the chapter on time includes several instances in putting, where the ball hangs on the lip of the hole.

The current 10-second time limit included a loss-of-hole penalty for match play and a two-stroke penalty for medal play when it was first instituted in 1984. Four years later the penalties were reduced to a single stroke, but this easy-to-understand rule can still be a bit tricky to apply. Marrandette recounts the Lee Janzen incident in the 1998 NEC World Series of Golf to prove this point.

Marrandette also discusses not only the how of the Rules, but also the why. The geography of golf, spread out over 120 acres or more, requires the players to police their own conduct to an extent not seen in nearly any other sport, especially at the professional level. The Rules act as a code of golfing ethics to which all players usually adhere. This distinction from other sports is most stark in the game’s requirement for players to call penalties on themselves, no matter what the consequences.

This is a well-done book about a potentially dry part of the game of golf. High school and college golf coaches should find a way to have their players read it before the start of every season.

If nothing else, they’ll be tickled by the great cover photograph of a golfer trying to chip a ball from the nook of a tree branch, while standing on the branch itself. That scene alone might help convince them to open up the book.

Pete Oakley flew to California last week for the first of two Champions Tour events in the Golden State, burdened by a “nagging little cough.” It turned into much more, and his game suffered during the SBC Classic, held March 11-13 at Valencia Country Club in Santa Clarita.

“They had a doctor available for us, and I was taking steroids,” Oakley explained. “They helped a lot. I couldn’t eat and felt weak. If I could get healthy, I know I’d play better.”

It wasn’t all bad. Oakley played his second round with Hubert Green and Fuzzy Zoeller, and despite his illness Oakley said he laughed all day thanks to Zoeller’s constant commentary. “That’s the most fun I’ve ever had shooting a 79,” he said.

Oakley’s next tournament remains in southern California, at the Toshiba Senior Classic, held at the Newport Beach Country Club March 18-20.