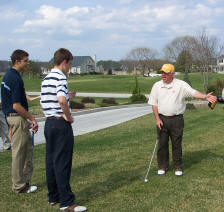 Senior John Purple led the Vikings with a 1-under par 35 on the front nine at Rehoboth Beach Country Club. “It was good,” he said simply. “I had eagle opportunities on both par 5s. I was 15 feet away on 4, and chipped my third shot to 6 inches on 9.”

“There was a good flow to the round,” Purple continued. “Everybody was playing good.”

Jason Hastings shot a 2-over par 38 for second-best on the team that day. “I played pretty decent,” Hastings said. “I had no three-putts, and made most of the putts that were within 8 feet.”

Alex Hatter’s 45 was good for third among the Viking players. “I took a 7 on the second hole, and parred the 4th, 6th, and 7th. I doubled the first hole, and bogeyed the rest. I’m starting to get more consistent with my tee shots and my putter.”

Travis Parker also contributed to the team score with his 46. “I birdied the ninth hole with a one-putt. But I took an 8 on [the par-5] number 4. I had a pitch shot from 20 yards out and put it right into the water.”

The Vikings then traveled to Bear Trap Dunes on April 12. Playing the Black Bear portion of the 27-hole layout, the team beat Indian River 162-172.

Purple took medalist honors with an even-par 36. “I had it to 2-under at one point, but it was getting cold. I finished bogey, bogey, par for the last three holes. The course played pretty hard. The fairways were firm and fast, and the greens were quick, with hidden breaks.”

Hastings finished third overall and second for the Vikings with a 3-over par 39. “I was three over after the first three holes, and I made one birdie and one bogey after that. The birdie was on a par 5. I was on in two, and then two-putted. It was extremely cold and windy, and I had a lot of in-between shots from 75 yards out. I was hitting punch wedges, and they were hard to hold on the greens.”

Parker improved once again, shooting a 42 for his best competitive score thus far. “I had four pars, three bogeys, and one double bogey. I three-putted once on the first hole. The pin placements were among the hardest I’ve ever seen. They were on slopes and hills and everything. I hit 6 [out of 7] fairways, so that was good.”

Andrew Schneider and Alex Hatter both shot 45s, and one of those scores completed the team’s tally for the day.

Schneider said his round was “alright.” He had five pars, but also took an 8 on a par 3. “The first shot went into a hazard, and I tried to play out. The ball went about a foot deep into the ground. Then I took an unplayable lie, and that’s what led to the 8.”

Hatter was more chipper about his round. “It was fun,” he said. “The greens were incredibly fast, and the breaks were more than I expected. I three-putted my first hole [the second], but that was the only one of the day. His playing highlight was a birdie putt from 10 feet on a par 3.

The Vikings were next scheduled to host Lake Forest at Rehoboth Beach CC on April 14.

A new blizzard of fun for Ed Mihm

Ed Mihm is a pretty popular guy, thanks to his ownership of the local Dairy Queen franchise adjacent to Lewes Beach.

He was even more popular after the opening season tournament held April 10 at Shawnee Country Club.

Mihm made a hole-in-one with a 9-iron from 147 yards on the par-3 ninth hole. It is the 47-year-old golfer’s first hole-in-one on a regulation golf course.

“I took my usual swing, and the ball stayed right on line. It hit about 2 feet in front of the hole, took one bounce, and went right in. Wow!,” said Mihm.