A few years ago I was startled to see some of the ads for playing golf in the Myrtle Beach area during what is normally its busiest season, the late spring. Several courses offered golfers 18-hole rounds for under $30, far below the premium prices they charged during the boom years.

The recession certainly had an impact on this famously popular part of the golf tourism industry, but from what we saw during our five-round spring golf trip in late April, things are definitely looking up along the Grand Strand.

Prices were back up into the high $60s and beyond, and many of the courses appeared to be doing just fine.

We stayed once again at the Sea Trail resort in Sunset Beach, North Carolina, a few miles north of the South Carolina border (800-624-6601). This 2000-acre development, with three full-size golf courses, also offers a wide variety of housing options for the avid golf tourist. The villas we rented this year were first-rate. 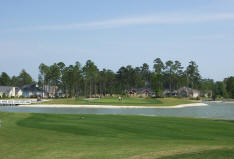 The fourth hole on the Azalea nine-hole layout at Brunswick Plantation, Calabash, NC.

Our first round was at Brunswick Plantation & Golf Resort, in Calabash (800-848-0290). This 27-hole course spreads the golfers among three sets of nines, and we played the Dogwood and Azalea courses.

The greens were a little off, but the fairways were in good shape. My swing wasn’t, though, and my score showed it. 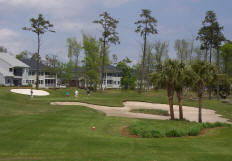 We played the second round at the Rees Jones Course at Sea Trail.

We’ve played this layout before, and it was in great playing condition, especially the greens. Like most well-designed resort courses, there’s nothing hidden about the potential trouble spots. Therefore, it’s all the more annoying when you see your ball heading directly for them. A few more pars than the day before helped salvage the round, however.

We noticed fewer cars in the parking lot than other courses we’d seen, and we eventually found out why. Several holes, especially on the Woodlands 9-hole layout of the 27-hole course, were simply not well designed. One hole essentially rewarded a deliberate shot into a pond in order to reach a drop area next to the green. Even so, my score was much improved overall, except on a few of these questionable holes. 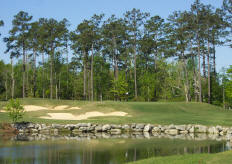 The uphill par-3 second hole at Tiger’s Eye Golf Links in Sunset Beach, NC. This tough hole plays even harder when there’s a stiff breeze in the players’ faces as they tee off.

We’re not alone in this assessment. It was just ranked 41st in the Golf Digest Magazine’s rankings of America’s 100 greatest public courses.

The fairways ran hard and fast, and the greens were a treat—as was my score. 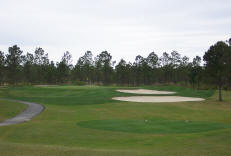 While the course wasn’t particularly long from the white tees, there were plenty of challenges. Our group quickly agreed this was a course we should play again on another trip.

Pete Oakley distinguished himself in his inaugural year on the Champions Tour in a big way this past weekend, at the Blue Angels Classic in Pensacola, Florida.

The Rookery’s Director of Golf made the Tour’s first hole-in-one of the 2005 season during the second round May 14. Oakley used a 4-iron on the 191-yard par 3 twelfth hole, and the resulting eagle helped bring him to a 3-under round of 67 for the day.

“It was very fortuitous,” Oakley said. This was his fourteenth ace, but it was probably also his most profitable, thanks to his participation in a little hole-in-one club run by fellow Champions player Dana Quigley.

Oakley finished the tournament the next day tied for 56th at 2-under par. “I was playing inconsistently. Fortunately, I birdied 3 holes in my last eight.”

This weekend Oakley is in Birmingham, Alabama for the Bruno’s Memorial Classic, held May 20-22 at the Greystone Golf & Country Club.