Last year’s golf team for Cape Henlopen High School lost its first match, and then ran off an unbroken string of one-on-one victories on the way to the conference championship and a fifth place finish in the state tournament.

This year’s team is trying to match that accomplishment. So far it’s working.

They traveled to Sussex Pines on May 3 and easily overcame their hosts from Sussex Central, 162-235.

Senior John Purple, Jr. finished in top spot for the Vikings with a 3-over-par 39 on the front nine. “I birdied the second hole, a par 4,” Purple said. He also parred the 1st, 4th, 5th, 8th, and 9th holes, despite what he described as some “looney tunes” hole locations. “Some of them were right on the [green] slopes. You had to be below the hole with a straight-up putt or you were in trouble.”

Junior Andrew Schneider agreed with Purple’s assessment of the greens, and he also managed his game to a 40, good for second among his teammates. “It was alright. I had a lot of one-putts.” 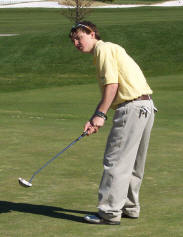 Travis Parker watches his putt roll toward the hole in a recent golf match for Cape Henlopen High School. The sophomore has been playing golf for just over one year, and is already scoring in the low 40s.

Fellow Junior Jason Hastings scored a 41 and Sophomore Travis Parker shot a 42 for the final two scores for the match.

On April 28 the Vikings hosted the Eagles from Smyrna High School, and won 164-188. Hastings took medalist position with a two-over par 38 on the front nine at Rehoboth Beach Country Club. His round included an eagle on the ninth hole, a rare treat in high school golf.

“I played pretty good,” Hastings admitted with a grin. “I hit driver and then 3-wood to four feet, and made the putt.”

Purple was next with a 40. “It was okay. I’ve been hitting the ball almost the same every match, it’s just a matter of putting.”

Sophomore Andrew Parsell returned to play after a nagging injury with a fine 42, and his classmate Parker finished up the team scoring with an unusual 44.

It’s unusual because it started with a 9 on the par 4 first hole. “It was looking bad in a hurry,” Parker said. “I was real down on myself.” Nonetheless, Parker recovered with a birdie on the second hole, and followed that up with pars on the 4th, 5th, 8th, and 9th holes.

The Vikings traveled to the Seaford Country Club on April 26 to face the Blue Jays of Seaford High School, and beat their hosts 166-194. Purple’s 2-under-par 34 won medalist honors again for the team captain.

Hastings’ 40 was good for second place overall, just behind Purple. Schneider took third place for the Vikings with his bogey round of 45, while Alex Hatter’s 47 completed the Vikings’ qualifying scores for the day.

On April 21, the Vikings easily handled the Milford Buccaneers 169-195. In recent years the two teams have been much closer.

Hastings took medalist honors playing from the Number 2 spot with a three-over-par 39 on the front nine at Rehoboth Beach Country Club. Purple shot a 40 for second place among the Vikings.

Parker continued his improving play with a 43, while Schneider and Hatter tied each other for fourth place among the team with their pair of 47s.

The team has a few matches left, and then begins preparations for the conference event and the state tournament.

Pete Oakley sounded both subdued and hopeful during a recent interview about his latest Champions Tour performance April 29-May 1, in which he finished back in the pack at 12-over par, winning $2,475 in the FedEx Kinko’s Classic in Austin, Texas .

“I played good in the final round [73],” the Director of Golf at The Rookery said. “But I’d already dug a hole for myself in the first two rounds [77 and 78]. I have to keep on plugging and grinding like these other guys do. I learned that a long time ago, and I need to re-learn that lesson. It’ll come around.”

The next Tour event will be held May 13-15 near Pensacola, Florida. The Blue Angels Classic takes place at The Moors Golf Club in Milton, and Oakley plans to be there.