Not your normal coffee table book

This year’s Masters Tournament was yet another great contest of tremendous golfing skill, in which the course itself played a major role in creating the excitement.

I think that fact is best summed up by the shouted commentary of CBS announcer Verne Lundquist, immediately after Tiger Woods made that incredible birdie on the 16th hole. As I recall it went something like: “Wow!! In your life have you ever seen anything like that!?!”

Well, no—and that’s because there are precious few other golf course designs where any remotely similar shot is even possible–except, perhaps, on other courses designed by Alister MacKenzie.

To cite a personal example, I once made a long uphill putt on the par-3 18th hole at Pasatiempo GC, near Santa Cruz, California, that fish-hooked to a dead stop just above the hole, and then gently rolled to a final resting spot just below. It wasn’t as stunning as Woods’ achievement on the 16th on Masters Sunday, but the result was a bit startling nonetheless. 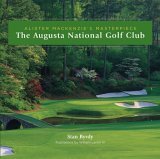 Byrdy is an Augusta television journalist, with another fine local history of the area already to his credit. In this book, Byrdy takes a more focused look at the original concept for Augusta National and how it came to be.

Unlike most other coffee-table sized golf books, especially relating to The Masters, this one is not filled with gorgeous color photographs. Instead, the primary graphic focus of this book is centered on line drawings and old black-and-white photographs, depicting how the course once appeared and how it now challenges its golfers.

If ever anyone doubted that golf courses inevitably change over time, this book should certainly put that notion to rest. The owners of Augusta National have shown a sometimes surprising willingness to tinker with the original design since it first opened.

Byrdy’s narrative, accompanied by drawings by William Lanier III, shows each of the major changes in the 18 holes that have altered the course’s demands on its players. In addition, the portions of the book discussing the Masters Tournaments detail how the golfers were forced to change their scoring strategies in playing the event.

Byrdy repeatedly emphasizes the unique collaboration that MacKenzie and Bobby Jones enjoyed in developing the plans for converting a working nursery farm operation into the beautiful sporting venue millions of golfers enjoy seeing each spring. That kind of close cooperation is not always present or possible between two strong intellects, especially when they are separated by a few decades of life experience, but in this case the two men seem to have genuinely meshed their thoughts toward a common goal.

Without directly saying so, Byrdy seemed intent on reminding the rest of us about the real scope of MacKenzie’s contribution to what many folks think of as a Bobby Jones masterpiece.

The members of Augusta National are admittedly wealthy, and fully capable of spending millions of dollars that many other golf courses just don’t have in order to make their golf course as beautiful and challenging as they can.

Nonetheless, the design principles adopted by MacKenzie and used throughout the Augusta National layout don’t really depend on seven-figure sums to create a golf course that presents a good test of skill for its players, at all levels of ability. Byrdy’s history of this famous golf course can be a useful guide for golf committees willing to improve their own layouts, even if their budgets are a fraction of what’s been spent on this masterpiece.

They just have to look past the perfect turf to what really lies beneath the polished veneer we see during the first full week of each April—a remarkably good adaptation of the natural contours of the property for the sake of creating a great golf experience.