A friend of mine attends a large-group project status meeting every month where he works. It’s a collection of professionals from widely disparate fields of expertise, whose combined responsibilities produce several long-term projects for their employer each year.

He’s in charge of administering the contracting part of the process, and he has a huge say in determining when these projects will actually hit the street.

Because of his role, the others at the meeting tend to pay close attention to his opening remarks, since their preferred projects may be at stake. For this ready-made audience, my friend likes to find and use great quotes to set the tone for these meetings, be they from Shakespeare, Socrates, or several other sources.

He’s sometimes surprised at how well the folks at the meeting remember these quotes, long after the meetings conclude. 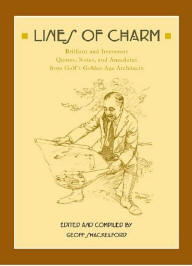 I was reminded of my friend’s experience when I read Lines of Charm, Geoff Shackelford’s collection of short pieces from the famous golf course architects of the early 20th Century, what Shackelford and others like to call the Golden Age (Sports Media Group; $19.95 SRP).

One of his first books, Masters of the Links, put together a fine assortment of essays on golf course design. In addition to modern-day contributors, the book included several contributions from A.W. Tillinghast, C.B. MacDonald, Robert Hunter, and others from that remarkable period in golf history. This new edition puts together similarly impressive golf writing, but in segments taken from books and magazine articles written by these and other luminaries of that time.

If you enjoy reading books formatted along the lines of Richard Carlson’s Don’t Sweat the Small Stuff, this book is right up your alley.

It’s easy to imagine golf club greens committee members using this book, searching for support for their proposals for improving their own courses. After all, if Bobby Jones or Alister MacKenzie once made the same point you’ve been trying to have your fellow committee members accept, why not enlist their remarks in service of your efforts?

For example, suppose some club members are pushing for new tee boxes to lengthen the course, based on the yardages they’re now seeing on the courses played by the PGA Tour. The committee would do well to quote Robert Hunter, credited for California’s famous Cypress Point layout, from page 65 of Shackelford’s book:

The stretching out of holes to their last limit has often not only an evil effect on individual holes, but also on the layout in general and on the interest and quality of the course. It is refreshing now and then to find a club which has ignored the race for length and gone in for quality.

Besides having the benefit of being true, the quote also serves as a useful reminder that the length debate is not new to golf, even if 460 cc drivers are.

There’s also an entire segment on trees that I plan to memorize and then use to badger the committee at my club for a major thinning campaign.

The book also includes several great illustrations. Some are cartoons from the Golden Age, while others show the designers’ first conceptual plans for some now-famous golf holes, such as Augusta National’s 12th and 13th holes.

The one quibble I have with the book relates to the description of the sourcing for the quotes. The back of the book lists the books and magazines where Shackelford found them, but I would have also liked to have seen an index that showed exactly where each quote originally appeared. It might be helpful to see the context in which some of these remarks were made. Perhaps that oversight can be addressed in a later edition.

Golfers who appreciate sharp-witted writing about the courses they play will enjoy this new edition. They will find themselves increasing their appreciation for these famous designers, not only for their handiwork on the ground, but also for what lies between the covers of this book.