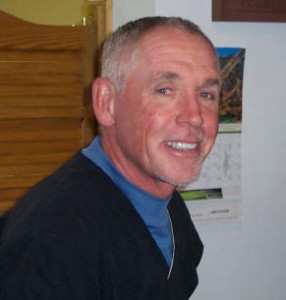 If it was, the prank paid off very nicely for the popular Milton resident.

Peterson grew up in the northern part of the Jersey Shore, graduating from Southern Regional High School in Manahawkin in 1977. His father was a scratch golfer and an insurance salesman. Peterson began working for his dad, which included taking clients out for the occasional friendly round.

After one such afternoon on a summer day, the 21-year-old Peterson returned to the pro shop at Colonia Country Club in New Jersey with one of his father’s clients. The client told the golf pro, Roy Favor, that Peterson would be a good assistant pro. Favor looked at him and said, “I have only one question—can you work July 4th?”

Thinking the two men were just kidding around with him, Peterson told them he could. Favor then said he’d talk with the Board, and told the young man to show up the next day at 10 a.m.

“I decided to take them up on the joke, and go there at 10 minutes to 10, wearing a suit. Ten minutes after 10, Favor comes in and says, ‘Great! You’re here early. I talked to the Board and they said okay.'”

Stunned, Peterson nonetheless decided to go ahead and take the offer. He’s now been a golf pro for 20 years, and is about to start his fifth year at Shawnee CC.

Peterson said Colonia was an exclusive, upscale club. “It was a fantastic place—plush, posh. Working there felt almost like being on vacation. It was so enthralling that I stayed with it. Favor also told me to work at all four types of golf jobs—upscale, public, midlevel, and teaching, and then I’d know what I was best suited for.”

Peterson acted on the advice, with eventual stints at Atlantic City CC and Green Acres CC in Lawrenceville, near Princeton. He was teaching at a golf center/driving range in Vineland, New Jersey when the opening came up at Shawnee.

“My experience here has been very enjoyable. I do a lot of teaching, which I love. Tournament participation is growing each year. All the numbers relating to golf are up, even though the total membership is down a bit.”

Peterson also said, “Living in a beach community here is pretty much the same as when I was living on the Jersey Shore, but there are differences. [Shawnee] is much more recreational-driven and laid back, and there are more seniors. The area’s grown tremendously, but it’s still a much more casual atmosphere than the Jersey clubs. They had more business people, and summer traffic was heavier [on the golf course].”

Peterson said the biggest surprise to him since coming to the Cape Region has been the low participation of junior golfers. “I’m not sure why that’s so, but it’s definitely off compared to Jersey. For the summer junior program at Atlantic City, there’d be 90 kids signed up. Down here, it’s more like twelve.”

The life of a club professional requires many hours at the course. During the summer season, Peterson works six days a week, minimum. “It’s busy. I worked 28 days in a row one summer, because of what was going on. For my day off, I usually spend it in Rehoboth, on the beach or the boardwalk or just walking around.”

He also plays in Philadelphia PGA sectional competitions, especially the pro-ams. “At this point in my golfing career, it’s far more important to play golf with the members, or in a pro-am tournament with them, than any other form of playing. And I enjoy it.”

All in all, Peterson is yet another Jersey transplant to the Cape Region who’s happy to be here. Lots of Shawnee’s members share that sentiment.