Golf lessons from way back to right now

The 2006 PGA Tour season began in Hawaii a few weeks ago, and once again I could be found in a familiar horizontal position on the couch, in front of the television.

Several dozen famous professionals struggled in the strong winds and difficult course conditions set up to challenge them on the broad, hilly Kaapalua golf course. I can only imagine the scores some of us middle-handicappers would post if we tried to play it from the same tees, with the same 30-knot breezes.

It might discourage a few of us from playing any more. For many other avid golfers, however, the experience could easily spur them on to search for ways to enhance their skills.

Lessons from the local golf pros are highly useful for this purpose, but not exactly feasible during mid-winter in the Cape Region and in most of the rest of the country. Those folks are left with more passive options for improvement, such as the instruction pieces that fill most pages of the popular golf magazines, as well as the many books dedicated to that task.

Reading these articles and books over time will prove a few basic truths.

First, there are many paths to golfing enlightenment. Second, many of these paths are diametrically opposed to each other. And third, some instructional pieces are well worth keeping, even if the rest of the magazine quickly becomes dated. 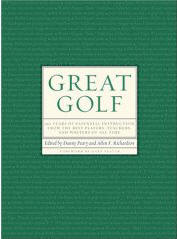 Great Golf: 150 Years of Essential Instruction from the Best Players, Teachers, and Writers of All Time

Danny Peary and Allen Richardson apparently decided to act on that last bit of knowledge, with their comprehensive compilation of some of the best golf instruction ever written. They rummaged through some of the major collections of golf literature, such as the extensive library kept by the United States Golf Association, and selected a remarkable collection of golfing tips, titled Great Golf: 150 Years of Essential Instruction From The Best Players, Teachers, and Writers of All Time (Stewart, Tabori, & Chang; $29.95 SRP).

The instructors range from well known modern-day professionals such as Tom Watson, Jack Nicklaus, and Annika Sorenstam, to historic figures such as Bobby Jones, Babe Didrikson Zaharias, and Ted Ray.

They also include some important contributors to golf literature not well known to many golfers, such as H. J. Whigham, a late nineteenth century American Amateur champion and author of the first American golf instruction book.

The book’s sections are divided in traditional and logical ways, first by the basic golf elements of stance and swing. Later sections are devoted to pieces attempting to impart wisdom on playing the course, such as driving, bunker play, and putting. The final segments relate to course management and game strategy, which is of course the natural progression of golfing skills.

In each chapter, Peary and Richardson pay homage to their historic predecessors by including a representative article or book segment from an old source or two. The pieces following thereafter are progressively closer to modern times.

While some might be tempted to read only the more up-to-date portions, the editors often prove (and frequently comment upon) the fact that many “modern” bits of golf knowledge are simply updated expressions of some very old ideas. The language of Henry Cotton or Percy Boomer may read a bit stilted to some 21st-Century readers, but their concepts are well-expressed and just as valuable with today’s equipment as when folks were just becoming used to the Haskell ball’s impact on the game.

Those looking for stop-action photographs to learn how to play should not look here. There are several illustrations, many of which are useful, but this book does not assume that golfers will learn by looking. The operating assumption for all of these writers was that their ability to communicate in words would suffice—even for some contributors that one might not expect to have had that goal, such as Sam Snead.

This collection does a great job of proving the basic three truths of golf instruction mentioned above. For golfers who can think through and figure out which advice would help their games, it’s also a mini-encyclopedia of golf teaching that could be very helpful as they prepare for the upcoming season.