Cape golf buddies whoop it up with winter golf

Some women golfers have all the fun.

At least, that’s what it looks like when you see them playing together.

A dozen or so Cape Region ladies are having a great time with their new winter league. They’re using the golf simulator at Clubhouse Golf, hosted by store owner Ed Larkins.

The computerized system is tucked in the back left corner of the store. A projector splashes an image of a golf hole onto a large screen, and the players hit real golf balls with real clubs directly at the image. The computer calculates the shot results, and it’s surprisingly realistic. 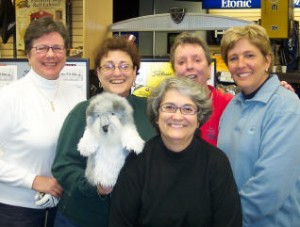 Bonnie Quesenberry of Rehoboth was at the tee when I visited the group on a recent Tuesday night. “I just started playing golf last April. We were in a women’s league at Marsh Island [Golf Course] all summer. They closed down 9 holes for us, and we had a shotgun start. Sometimes we played best ball, sometimes capture the flag, and sometimes straight golf. We had up to 52 players sometimes.”

“For this winter league, six of us show up two nights per week, and we play a scramble. I’m learning a lot,” Quesenberry said.

Mary Ann Slinkman said she’s played golf since she was 15, about 40 years ago. She moved to the Cape Region a year ago, and during the season she plays at “the Rookery and everywhere else.” Slinkman is one of the better league players, with an admitted 20 handicap. When I asked her if she used her own clubs, she laughed and showed me her grass-stained sand wedge.

Fay Jacobs, well-known director of Rehoboth Beach Main Street, is an enthusiastic rookie. “I love it—I’m horrible at it, but I love it. This is like my Outward Bound thing. I’m going to stick this out.”

Jacobs said that when she began playing in the Marsh Island league, her plans didn’t include this kind of commitment. “I was thinking I could get a column out of it [for her series in the Letters from Camp Rehoboth magazine]. But it was so much fun I kept up with it. Then I saw the FJ symbol, and now I have it on everything,” she said, proudly displaying her Foot-Joy golf glove.

Jacobs said she loves playing in the winter league. “There are no bugs. There’s no heat. There are no snakes. And, you can shop between your shots,” she laughed.

Sharon Hansen of Milton played golf for over twenty years. She missed much of last summer while battling cancer, but for several years before then she held an active membership at The Rookery.

Hansen has a great sense of humor, despite her recent health troubles. At one point, Slinkman duffed a shot, and asked the group if her ball had gone into the greenside bunker. Hansen immediately piped up in a high falsetto, “Am I in the bunker? Oh prithee, prithee, could that be?” and burst out laughing.

Slinkman then grinned and told the other women, “I don’t care if she’s a survivor. I’m taking her out.”

Pam Kozey of Breezewood took lessons a dozen years ago and played for a while, but then left the game. She recently returned to the sport, and is thoroughly enjoying herself.

“During the season I play at Baywood, Salt Pond, and The Rookery. My handicap is a lot,” she laughed.

“I love this winter golf, too. It’s fun—it’s not real golf but it’s fun. I think it’s also really helping me hit the ball better, because you can see the swing path after the shot. I just hope it carries over to when we go outside.”

Kozey also credited Larkins in explaining why the group enjoyed their twice-weekly rounds. “The other part that’s so nice about this is that Ed is so great. He sits and watches us and gives us tips. He’s really nice.”

I’m not sure, but I think she made Larkins blush when she said that.