For the last 25 years, my office wall has featured a framed bit of calendar art that almost always makes new visitors smile–and then they ask me where I found it.

The cartoon shows a few furry creatures in an unusual setting, titled with a really bad but altogether fitting pun under the circumstances—”Gopher Baroque.”

The print is by Sandra Boynton, the creator of hundreds of familiar greeting cards for Recycled Paper Greetings. I keep it hung on my wall because it never ceases to cheer me up. It also speaks to my preference for finding creative solutions for my clients’ problems, especially when the usual approaches don’t seem feasible.

I thought of this bit of artwork when I learned that the creator of Bandon Dunes Golf Resort also has a strong connection to Sandra Boynton.

Mike Keiser is one of the original creators of RPG, which is a hugely successful member of the greeting card industry, not least because of Boynton’s profitable contributions over the last few decades. Keiser applied that same entrepreneurial spirit in developing his own vision of what a golf course should present to its players. In addition, his attitude toward reaching his goals frequently called to mind the same sentiment Boynton described in this pun-based cartoon. 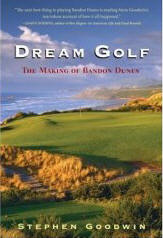 Stephen Goodwin, a writer and former director of the National Endowment for the Arts, also dabbled a bit on a golf course project in Maryland. George Peper, former editor-in-chief at Golf Magazine, suggested Goodwin should write a semi-official story of the already legendary golf resort on Oregon’s southern coast. It became Dream Golf: The Making of Bandon Dunes, (Algonquin; $24.95 SRP).

Goodwin brought to the task his own keen interest in course design, which probably helped convince Keiser and his other interview subjects to open up with remarkably candid assessments of how Bandon Dunes, Pacific Dunes, and Bandon Trails were designed and built.

Keiser is in some ways a classic American entrepreneurial success story, but with a particular Boomer twist or two added. His astounding business achievements at RPG gave Keiser the opportunity to return to golf, an old passion.

Goodwin shows how Keiser used several techniques from his RPG experience to develop his first golf course along Lake Michigan. He then successfully applied the lessons learned from that project to his eventual acquisition of a large spread of promising acreage in Oregon.

I also enjoyed reading about golf course architects David Kidd, Tom Doak, and the team of Ben Crenshaw and Bill Coore, whose designs at the Bandon layouts are so well-regarded. After describing the different approaches the architects used for their segments of the property, Goodwin also provides hole-by-hole descriptions based on rounds with some of the responsible parties.

Even so, I especially appreciated the extended segment Goodwin devoted to the planning process required to obtain the necessary government permits before the the first shovel was turned. Keiser hired Howard McKee for this critical part of the project. Years before, McKee helped draft Oregon’s famous land-use law, which one could have justifiably predicted would have kept a normal golf course or two from ever being built along this Pacific shoreline.

It truly helped that Keiser never wanted to build a typical golf resort.

Nonetheless, in my professional work advising a government agency on much the same land use issues, I was very pleased to learn about the approaches McKee took in finding a way to carry out Keiser’s vision under very difficult regulatory circumstances.

Behind-the-scenes preliminary work can make or break any proposed land use project. I think that fact is unacknowledged by most golf course architecture fans, perhaps because they don’t even realize its critical role for eventual success.

In this case, however, the planner and the developer essentially adopted the same attitude memorialized the Boynton pun that hangs on my office wall. It worked like a charm.

No one needs to have played these three courses to enjoy this book. I haven’t played them myself, yet.