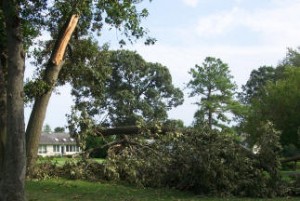 Most of a fallen sweet gum tree fills up a greenside sand trap at Shawnee Country Club’s 12th hole, courtesy of the winds accompanying what was once Hurricane Ernesto.

Many Cape Region residents let out a premature sigh of relief when Hurricane Ernesto was downgraded to tropical storm or tropical depression levels before it hit the area Friday, September 1.

Ernesto had enough strength to cause some remarkable changes in the appearance of several Cape Region golf courses. The damage could make some folks wonder how much worse an official hurricane could have been.

Ron Barrows, the head golf professional at Rehoboth Beach Country Club, said 26 trees were knocked down on the popular private club’s property. Fortunately, only one of the trees had a recognized role on the golf course.

“By the left side of the first hole there was a unique tree that looked like it should have been at Pebble Beach,” Barrows said. “It was low and crooked, and now it’s gone. The crew here did a great job of recovering from Friday’s storm. We were closed on Saturday, but we were open at 7:30 on Sunday morning. We were also lucky we didn’t have any salt water intrusion this time.”

Rob Marshall of Old Landing Golf Course said, “It was wall-to-wall branches and leaves around here. It was terrible.” They closed the course on Saturday, and spent the time using a turbine blower and other equipment to pick up the pieces. Marshall also said two trees were lost on the second hole, and for a while they also had to contend with high water coming in from Rehoboth Bay. They were back in business on Sunday, however.

The Rookery Golf Course came through this storm fairly unscathed. Course superintendent Chris Adkins said they only suffered some minor, and only a few trees were smacked down by the high winds. “It was just heavy rain for us, mostly,” he said.

For Harry Wanner, the superintendent at Sussex Pines Country Club in Georgetown, and the folks at Cripple Creek Country Club outside Ocean View, Ernesto couldn’t have come at a worse time. The two courses were to host a combined tournament sponsored by the Delaware State Golf Association on September 7 and 8.

Wanner said, “We were prepping for the tournament, and we had a lot of damage. Our crews worked around the clock since the storm to get these places ready, and we’re going ahead with the tournament. The trees at Sussex Pines fell down and knocked over some fences, and we had other trees and branches down in lots of other places. Fortunately, we had minimal flooding.”

As when the June storms that flooded much of Sussex County, Wanner took advantage of the storm warnings to drain down the club’s primary pond to one-third of its normal level. Ernesto filled it right back up. Wanner also said Cripple Creek saw some minor flooding from Indian River Bay, but they recovered quickly. The real risk is for turf damage from the salt water, but they won’t know the extent of that damage for a while yet.

Shawnee Country Club suffered the most vivid damage, with several large specimen trees falling down in some sensitive places. Course superintendent Steve Zeveney was most upset with the damage to a newly replaced irrigation pipe system between the first hole and the eighteenth tee. “The tree fell right on it, and knocked out the electric boxes and damaged the new pipes,” Zeveney said.

His maintenance crew also faced real risks in removing some of the trees, especially a very large maple that fell over most of the white/red tee box for the thirteenth hole. “It’s not only huge, but it’s covered in poison ivy. My guys are wearing tyvek suits, but the chain saws can create poison ivy spray that can get in your lungs. We’re going to have to be really, really careful about that one.”

After jury-rigging repairs to the irrigation system, Zeveney said he’s focusing on the trees that fell or damaged the tees, fairways, rough, and other areas, in that order. “This is going to take several weeks, if not much of the winter,” he warned.