The first part of a very different twelve-step program

A recent column discussed how some Cape Region golfers succumb to “sandbagger-ish” tendencies, when they realize that the golf handicap they carry at the end of October will last until April. These folks might be mostly honest about their scores the rest of the year, but it’s hard for them to avoid trying to puff up their handicaps to enhance their betting opportunities over the winter. 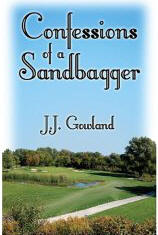 Confessions of a Sandbagger

J.J. Rowland of Ontario wrote a quick-reading, funny new book about the kind of golfer that applies this dishonest approach to golf throughout the whole year. The tone of Confessions of a Sandbagger (SRP $19.95) is a bit similar to what one hears during some twelve-step programs for other maladies. Unlike those other unfortunates, however, when it comes to dealing with these cheaters, most golfers would be more interested in the punishment side of the rehabilitation process.

The cover of the book shows a picture of a quiet little par-3 hole. A wide pond stretches across the middle of the yardage between the tee boxes and the green. The water doesn’t appear to present any risks to the players, except for duffers and the odd muffed approach. The pond side closest to the green is infested by a stand of phragmites.

The anti-hero of this sharp little social satire, Michael Blaine, might disagree with that bucolic description. The fact that as the story opens, he’s floating in that pond, tied to his golf bag and cart, and weighted down with sand and extra golf balls courtesy of his playing partners, could have something to do with it.

Blaine probably deserved this fate, if not something worse—after all, he’s a sandbagger.

Few players one meets on the golf course are held in such low esteem by so many, and with good reason. Who ever really enjoys being hustled, other than masochists?

It’s the last official day for playing at the Ontario country club where Blaine has been victimizing the other members. Some of them have decided to do something about this smarmy little lowlife.

From his perspective, Blaine wonders what the fuss is all about. As he tells us, he’s only trying to make his way in the world, after being laid off thanks to Enron-like accounting finagles and other ethical lapses at Blaine’s former place of employment. His marriage is also in trouble, and he’s got bills to pay. His former mistress has also been, shall we say, a bit reluctant to keep up the romance.

In other words, Blaine is not only good at disguising his proficiency at golf—he’s also good at rationalizing his misbehavior.

To his continual shock and amazement, however, his usual powers of persuasion don’t seem to work on any of the foursomes that come to the 17th tee that day. Every one of them either ignores his splashing and calls for help, or actively berates him, or worse. And in this case, “worse” means trying to hit Blaine with their tee shots.

It’s as if everyone in the club has agreed to seek revenge against Blaine on the same day.

There are more than enough clues that Blaine is a genuine jerk, and as the day wears on the reader begins to wonder if he will really will be left in the pond to enjoy the upcoming Canadian winter.

I won’t spoil the ending, which is a bit abrupt but which also makes sense.

As with books from more well-known publishers, this book could have used a bit more editing, but it has its charms. In addition to Blaine’s character, Gowland also sketches out a wide assortment of other golfers who will seem familiar to the players who read the book. On a few occasions, Gowland captures well the familiar intimacies of long-time playing partners, as well as the self-deluding excuses used by most of us for the sorry states of our games.

And as Blaine may be learning, sometimes more than fate has to intervene in order to convince us to change our ways.