The Cape Henlopen golf team had a few adventures along the way, but still won two more matches as they went into their spring break at week’s end. 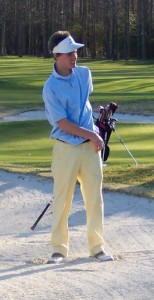 Travis Parker took medallist honors with a 4-over par 40, a score he described as “not too shabby.” He birdied the fourth and eighth holes, but took an 8 on the short but challenging par-5 seventh hole.

Samantha Purple must like playing her home course in competition. She posted a fine 41, including four pars. She scrambled a bit on the last hole, thanks to a drive that went far right of the fairway. Her second shot bounced off a tree and stopped about a hundred yards out. The third shot landed on the green short of the hole, and she had a relatively easy two-putt for bogey.

Her experience was better than a Dover competitor, whose drive landed in nearly the same spot as Purple’s. His second shot went up into a nearby tree and stayed there. After the obligatory efforts at knocking the ball loose from its perch, the player gave up and played from a spot below the tree, with the penalty stroke as an added treat.

Tristan Karsnitz shot a nice little 43, helped in part by a great drive on the par-4 ninth hole. His second shot was only 105 yards out, and his approach landed pin high about 20 feet away. He just missed a nice birdie.

Dino Nardo finished the team scoring with a 45, a few strokes above his normal 6 handicap for a nine-hole round. He knew exactly where those strokes came from.

“I took a triple and that killed me [on the par-5 seventh hole]. I went OB on my drive. Then I went 5-iron, 5-iron and was up on the front chipping from 40 yards in. I think that’s how I should play it from now on,” he said, a statement that shows his course management skills are coming along nicely. Also on the bright side, Nardo birdied the first hole.

The Vikings next traveled to Cripple Creek Country Club near Ocean View, and took a one-stroke win over their hosts from Indian River High School, 178-179.

“It was pretty cold out there,” Viking coach Claudio Smarrelli said. “Even so, we were sweating it out a bit there. None of our boys and girls had played this course before.”

This time Purple scored best among all the players, firing a four-over par 40 on the front nine. On the other hand, Parker had a bad day, shooting a 51 for fourth best on the team. The unusually high total included a 12 on one hole.

“Sam was happy. She played conservative, and was grinding and grinding throughout the round and did okay,” Smarrelli said.

“I told them before the match not to be too hasty about using their drivers,” the coach said. “Dino [Nardo] listened. He shot a 41. He was mad because he missed a putt or two, but he played very well.”

Karsnitz contributed with a 46. “Tristan played steady. So far he’s been the steadiest player on the team,” Smarrelli noted.

The coach also noted his appreciation for a $500 donation from Young, Conaway, Stargatt and Taylor, the Georgetown law firm. He plans to use the money to offset the cost of awards and the season-ending team banquet.

The varsity’s next match is scheduled for April 17.

The junior varsity continues to improve, according to JV coach Dave Inglis. In addition to playing regularly at Marsh Island Golf Club, the squad is also learning how to manage their games through a variety of competitions among themselves, including best ball, best ball worst ball, and playing with only three clubs.