Odds favor this book on golf and gambling

During this spring’s golf trip to Myrtle Beach, we arrived at the Wild Wing Avocet course a bit earlier than expected.

While we waited to be cleared to go to the first tee, a dozen or so golfers from another group started piling into their carts, to begin playing before we did.

Their overheard chatter was entirely in English, but I didn’t fully understand most of it.

The phrases were full of “four ways” or “six ways”, and “automatics,” and “double-downs.” The conversation was also peppered by a stunning variety of smart-aleck putdowns and ready-made excuses, such as the number of drinks someone had downed the night before.

I didn’t know exactly which kind of betting was going on, but I certainly knew I was observing a well-experienced bunch of golfing gamblers. They knew each other’s games and were trying to obtain the best odds for their upcoming round.

Our own group’s straightforward better-ball-of-partners game, at $20 per player, seemed almost childlike in its simplicity.

The sheer variety of competitive opportunities that golfers can dream up is one of the game’s greatest attributes. What we watched at Avocet that morning is common to nearly every golf course on the planet, every day, in amateur matches among friends and on the professional tours. 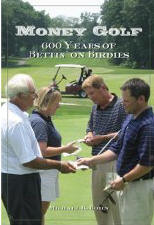 To judge from Michael Bohn’s comprehensive history, Money Golf (Potomac Books; $25.95 SRP), it was ever so.

Early Scottish golf club records kept bet books noting some of the more interesting wagers among the gentlemen golfers. The royal treasurer duly noted King James IV’s lost golf wager expenses. These and similar incidents grew along with the game, as it slowly developed into the sport we know today.

The British have always had a more relaxed attitude about gambling, compared to their American cousins. The difference is duly noted in Bohn’s history. The bookmaker’s art, so well developed in England and Scotland, never took hold in this country to the same extent.

On the other hand, the early years of the USGA and the professional golf tours in America probably would not have blossomed as they did, except for the fact that well-publicized bets by the players and their onlookers helped spur public interest in the sport, aided by a willing group of friendly newspaper writers.

Bohn describes several colorful competitive characters well-known to golf history buffs, with a special emphasis on hustlers such as Titanic Thompson and the early giants of the sport, such as Walter Hagen.

Sometimes you just have to wonder what was going on in the minds of some of the pigeons they played—until you remember that when nothing is going through those minds, their wallets are also open for the plucking.

He also notes some famous golf courses with a well-deserved reputation for their attitude about gambling, such as the El Paso course where Rich Beem worked as an assistant pro, or at East Potomac Park in Washington, DC, where the firepower wasn’t always limited to the business end of a well-struck driver.

The best parts of the book, to my mind anyway, were the tales told by well-known golfers from the PGA Tour, such as Palmer, Trevino, Nicklaus, and Lanny Wadkins. For Tour players, the Tuesday practice rounds are their closest equivalent to the friendly competitions played by millions of amateurs every weekend.

The stakes may involve a few more zeros, but the way that a little something on the side can help make golfers play better is an open secret not lost on the game’s biggest players. The gambling also makes for some very funny stories, always an added bonus.

Bohn concludes the book with a useful chapter on some of the more common betting schemes among golfers, along with an equally helpful set of suggested points about gambling etiquette.

I especially liked his reminder that regular betting among the same set of golfers usually keeps the same amount of cash circulating among the group. This reinforces the point that the money is never the point of all those bets, and never should be.