Father and son golf at its finest

If you stand at the first tee at St. Andrews, you might wonder why so many golfers make such a fuss about the flat, grassy landscape lying before you.

After all, there’s nothing visually dramatic about the light brown and green linksland stretching out along the water’s edge.

As with so many other significant sites of human history, however, what happens at a place can infuse the ordinary with the extraordinary.

And on these modest grounds, the legacy of a single family, and its connection to golf as we now know it, is present on every square inch of the place. 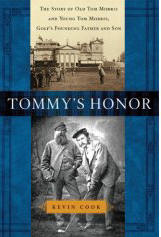 In many respects, the reason St. Andrews is known as the Mecca of golfers is entirely due to the efforts of Tom Morris, Senior. As one of golf’s first true greenskeepers, Morris endlessly tinkered with the property, experimenting with new methods to improve the greens, clearing the whins and other hazards, and in countless other ways making the course ever more playable for the increasing hordes of golfers coming to Scotland’s east coast.

In the meantime, Old Tom also distinguished himself as a golfer, winning what we now know as The Open Championship four times.

Morris was lucky enough to have been born at a place and point in Great Britain’s history that supported his decision to make a living at the sport. In the nineteenth century, this was a rare accomplishment, but one that showed signs of expanding opportunities for others.

Increasing industrialization in Europe and North America helped spur the notion of increased leisure time beyond the privileged classes, who always had time for golf and other pursuits.

Even so, the elder Morris never seriously challenged the established social order that permitted the rich to assume that their monetary wealth was also a sign of their innate superiority.

That challenge was left to his son, Tommy.

As Cook sets forth with telling details of Scotland’s social mores of the era, the junior Morris not only distinguished himself with his sterling play, including the development of shotmaking skills that seem perfectly routine today but were a source of wonder when he first attempted them. Tommy was also the first true golf professional to successfully avoid the greenskeeping and other duties that filled his father’s days.

The golf professionals who make up the PGA of America can trace their lineage to Old Tom.

The golf pros of the PGA Tour can trace their lineage to Tommy Junior, who also won the Open four times.

The combination of expanding leisure time along with expanding literacy among Great Britain’s population also paid off for Tommy, whose exploits were intensively covered by the newspapers of the time. Cook uses these and other historical resources to bring the readers into the excitement of the many matches played by the Morrises, along with the other intriguing golfing characters they competed against.

As with Mark Frost’s Greatest Game Ever Played, Cook appreciates the fact that the history of golf in the nineteenth and early twentieth centuries is best understood as an aspect of the socioeconomic history of the places where golf first really flourished. Thankfully, Cook’s story of these two men and their families is so much more than a simple sports biography.

You can’t really appreciate how far golf has come in the last hundred years, without understanding its origins and early expansion in the context of Great Britain and America’s development of a vast middle class during the same period. Along with other sports, such as baseball and football (both kinds), golf came to be appreciated and accepted by an ever-increasing base of participants and audiences.

None of that would have happened without the other significant changes in how those millions of folks lived, worked, and played.

Tommy’s Honor is a serious history of a game and two of its most significant contributors. It’s also far more, and well worth reading.