Steve Zeveney is acting like Paul Bunyan this winter, and many Cape Region golfers should be very happy.

The long time golf course superintendent at Shawnee Country Club is focusing on cutting trees during the current off-season.

Zeveney recently showed me some of the significant tree-removal and tree-trimming he and his crew have already done. It’s really impressive, especially for golfers who long ago discovered how little truth there is to the claim that trees are 90% air. 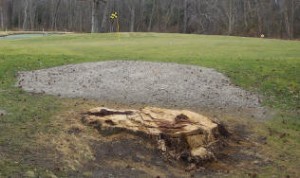 The large tree stump in the foreground will soon be covered with topsoil and seeded over, much like the already-covered stump between it and the second green at Shawnee Country Club.

The photograph accompanying this article shows two large stumps on the backside of the second hole. The one in the foreground has recently been cut, and several inches of the large old tree’s base are still visible. Just behind it is the site of a former, similarly large stump, now covered with topsoil and grass seed.

Zeveney explained that for many of these trees, he plans to continue this approach to covering the stumps, instead of removing them. “We can pull some of them out, but others are just too big. Covering with dirt and seeding them over works in a lot of places,” he said.

The par-five eighth hole’s tee box areas are also significantly opened up, compared to the aerial biomass hazards that discouraged thousands of golfers for many years. Zeveney and his staff cut down trees that blocked light and air at the back tee location. They also removed several large branches that overhung the middle tee box area. Those branches often played havoc with golfers using the back tees who hit either a high draw or high fade.

In October 2000, Stanley Zontek of the USGA’s Greens Section visited Shawnee and suggested the club should do exactly what’s now been done at the eighth hole. He said, “The USGA uses a line of sight guideline to keep branches or trees from blocking a line from the tee box edges to the fairway edges. The club can certainly leave them in place, because it’s just a guideline, but if the USGA held a competition here those branches and trees would go.”

Glad to see it happen.

In addition, Zeveney’s staff removed several pine trees that ringed the edges of other greens, notably at the third and seventh holes. These pines stood on the downslopes of the green complexes. They not only blocked the sunlight on the green, affecting the turf, but also made mowing more difficult.

Chris Adkins, the golf superintendent at The Rookery Golf Course, was the former greenskeeper at Shawnee. Adkins said the greenside pines were never intended to be permanent additions to the Shawnee landscape. “They were put in when that part of the course was first opened up, to provide some framing for the holes. The assumption was that they’d be spaded and removed from those spots after a few years.”

As often happens in golf course planning, however, a few years can quickly turn into a couple decades, if you’re not careful.

Adkins has his own wintertime project, and it’s a wet challenge.

Muskrats have burrowed through the bentonite clay that once formed a solid underwater barrier for the Rookery’s irrigation ponds. The new holes are draining the ponds, and Adkins plans to re-plug the holes to keep the ponds operating as planned.

First, however, he has to catch all the muskrats. “We’ve hired a trapper, and he’s getting them. Once he’s finished, we’ll start filling the holes, either with new bentonite or some other method.”

Jim Prucnal, the superintendent at Kings Creek Country Club, is putting the finishing touches on a major increase in the golf course’s irrigation system. He and his crew installed nearly 130 new spray heads, at five per hole, to water the rough areas adjacent to each green. “We tapped off the existing lines. The extra heads mean that we’ll extend our [irrigation] run times at night.”

Each winter, all of the Cape Region greenskeepers work on larger-scale renovation and repairs they can’t realistically perform during golf season, such as these projects. If you see them on your home course this winter or early spring, find a way to thank them for all their efforts.