The National Golf Foundation recently reported that in the United States in 2007, more golf courses closed than the number of new golf courses opened for business. The prior year’s numbers weren’t much better, either.

There are other signs that all is not well with the sport. Club professionals mutter about the rate at which golf club makers change models and switch inventory, especially for high-end items such as drivers. Golfers hesitate to commit to a $400-500 investment in their game if they think something better is just about to come out on the market.

If you look at the handicap lists kept by golf courses, however, the new equipment doesn’t have a significant effect on the members’ overall performance. The country is not exactly being flooded by hordes of scratch golfers. 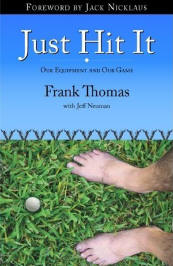 As Frank Thomas explains in his common sense-filled book, Just Hit It: Our Equipment and Our Game, hope can help for a while; inevitably, however, most golfers see their games return to their old ways (Frankly Publications; $22.95 SRP).

Thomas is the former Technical Director of the United States Golf Association, a position he held for many years after his prior work as a Shakespeare Sporting Goods design engineer. In his USGA position, he dealt with hundreds of clubs and balls, trying to make sure that the inventors and manufacturers met the organization’s technical (and not so technical) standards.

Thomas is also one of those rare folks who are technically adept and yet able to explain what’s going on in easily comprehended terms for those not so fortunate. This is very handy for folks who hear the term Optimal Distance Standard for golf balls, or MOI for club design, and feel their head hurt at the same time.

The best chapter in his book is titled “Three Innovations that Changed the Game.”

He describes the whys and hows of cavity-back, investment cast irons, the now-ubiquitous clubs for which Karsten Solheim of Ping was among the early proponents. It’s one of the best explanations why most amateur golfers should keep these clubs in their bags, and avoid any contact with the muscle-back forged blades the professionals use.

Thomas then discusses the development of graphite shafts, in which he himself played a leading role. While it’s hard to argue that these shafts represent an equivalent leap in shaft technology as that presented when steel replaced hickory, the change has nonetheless been widely accepted and beneficial for many, many golfers.

The last major innovation deals with the new drivers. Thomas explains the connection between cavity back iron design and the methods used to mirror that same kind of forgiveness in the longest club in the golfer’s bag.

As Thomas notes, if golfers simply make sure they incorporate all of these elements in their clubs, they’ll be hard-pressed to buy a better game with anything else.

He’s less impressed with golf balls, although he properly credits ball makers with significant improvements in quality control, compared to their wobbly efforts of 40 or more years ago. Some balls are clearly better for amateurs than others, but as with other equipment issues, Thomas stresses that most of us can’t create the swing conditions to take advantage of some features, or are simply too erratic to consistently benefit from the extra cost.

The best part of this book, however, is the calm, steady voice he uses in trying to temper golfers’ enthusiasm for the next new thing. He’s clearly not against innovation. Nonetheless, he’s aware of the long-term risks to golf of having folks believing that only a major investment in equipment can improve their game. High cost is a real barrier to bringing new players into the sport, and without those new entrants, it will be ever harder to keep clubs operating for their current members.

Hope is a very good thing to have, but acceptance may often be better for you in the long run.