Warm-hearted character study, just in time for The Masters

When it comes to selling golf books, there are three specific seasons on which publishers pin their hopes.

There’s Christmas time, of course. There’s also Father’s Day in June, when dads can sit in their recliners, browsing through a new coffee table book while watching the U.S. Open.

However, the year’s first really big push for golf books is underway right now. With only a few weeks to go before The Masters Tournament, bookstore shelves are beginning to fill up with new offerings aimed at those who enjoy reading about the greenest sport in the world.

Some of us bookish types are perfectly fine with this arrangement, and especially when someone writes a book that relates to this particular tournament, the first men’s major of the new season. 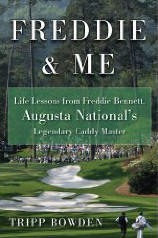 Tripp Bowden is an Augusta, Georgia native, whose doctor father just happened to include Augusta National’s caddy master among his many patients. Dr. Bowden was a very good amateur player in his prime, but the ten-year-old Tripp had no interest in golf—only fishing. In fact, the time his father spends playing golf seems to inspire deep resentment in the young boy.

But one day, Barnett appears at the Bowden residence, and invites the suddenly star-struck boy to join him on a fishing expedition to the nearby cathedral of golf.

After landing umpteen bream from the ponds with a pair of bamboo rods, the gentle giant suggests to Tripp that golf is a lot like fishing, at least in how to catch and land a big fish. Barnett shows him, and the boy quickly learns a proper grip.

From that mesmerizing experience, it was short work to bring the boy around to learning how to play golf, eventually well enough to play on a Division I college team. Long before then, however, Tripp had much else to learn about golf and life from his new tutor.

Barnett had a long and distinguished career as the caddy master at Augusta National. Based on Bowden’s account, he was a natural born diplomat, counselor, raconteur, protector of the weak, and general all-round good guy. Bowden tells story after story about Bennett and the Augusta caddies who worked for him, sprinkled with the occasional gossipy bit about the Tour players during Masters week, the giants of the business world who are the members of Augusta National, and some of the better-known guests of the members.

Bowden witnessed many of these stories directly, because after finishing college he was, as they say, a bit unsettled about his future. Once again, Bennett came to his rescue, hiring Bowden as a caddy for several seasons.

Bowden manages to befriend most of the other caddies, many of whom knew him since that long-ago fishing trip/golf lesson at Ike’s Pond. This child of privilege blended easily with men from less promising backgrounds, thanks in part to the relationship he already enjoyed with the caddy master. Portions of this part of the memoir are far less amusing, however, because of the heavy toll that life off the course sometimes took on some of Bowden’s fellow caddies.

His caddy experience also put Bowden in touch with a wide variety of golfers, there to appreciate the rarified atmosphere of this famous place. It also helped him land his first real non-caddy job, which in turn led to his current career in advertising. The term “networking” comes to mind.

This is a very quick read, almost breezy at times. Readers might want some parts of the memoir to include more than what’s here, but that’s not a large quibble.

I can’t recall if I ever before read a golf book, or any other book for that matter, that kept a smile on my face for almost the entire time. It’s a fine memoir of a man who deserved one, and a good coming-of-age story as well.

I highly recommend it.