Last week’s column discussed the chance that more snow or other wintry conditions would block any golf being played in the Cape Region anytime soon.

Based on what happened since, I should explore my new career potential as a Weather Channel on-screen meteorologist.

This coming week doesn’t look much better for playing outdoors, but at least I still have more golf books to read and recommend.

The past couple years have seen explosive growth in the digital book trade. The Amazon Kindle, Apple’s iPad, and several other digital book readers compete by format for the eyes of millions of avid book-buying customers.

Thus far, I’ve limited my iBook readings to the freebie selections, such as the classics of Jane Austen or P.G. Wodehouse. I have not sought to obtain review copies of digital golf books, although dozens of titles are now available.

After all, how could a Kindle or iPad hope to recreate the full sensory experience of a four- or five-pound, 9 by 12 or 12 by 12 heavy paper extravaganza of absolutely gorgeous golf photography? 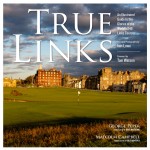 That’s why I was so glad to receive a review copy of True Links—An Illustrated Guide to the Glories of the World’s 246 Links Courses (Artisan; $40 SRP). Based on our home scale’s measurement, it totals 4.8 pounds of pure visual delight.

George Peper and Malcolm Campbell collaborated on this book, and they had the proper pedigree to apply to the task. Peper is a former longtime editor-in-chief of GOLF magazine, while Campbell is a former editor of Britain’s Golf Monthly magazine. The two writers also have many other golf books and periodicals to their credit.

This book is a master study of the archetypal golf courses, now called links or linksland. Most folks think first of the famous Old Course at St. Andrews, in Scotland, as their prime example of these layouts. It certainly meets the three basic minimum conditions outlined by Peper and Campbell to meet the definition.

First, the terrain should be close by the sea, with offshore winds capable of blowing sand onto the course, with hard and fast fairways, as natural-looking as possible, with minimum tree cover, and with what the authors describe as a light “environmental footprint on the land.”

Cliff-top courses such as Pebble Beach predominantly failed to meet this definition because blowing sand normally can’t scale the heights.

Second, the turf should be primarily sand or sandy loam, covered by a mixture of hardy bent grass and fescue varieties, and fast draining. The authors’ choice of turf minimums eliminated many potential southern candidates, such as Kiawah.

Third, weather factors have to be relatively stable year-round, at least in a few significant respects. Keeping the course generally unsheltered from the elements is critical, because that makes the winds a constantly changing factor in deciding how to play the course.

Those same winds must also keep the fairways hard and fast. If the course is subject to winter closure or required temporary greens in the “offseason,” however, that factor argued against its inclusion.

Based on these elements, Peper and Campbell made their admittedly arguable choices. To my mind, however, the debate should be limited to whether any other links or links-like courses should have been added to their collection. What they show in this beautiful compilation is beyond challenge.

My favorite chapter is devoted to St. Andrews, the only links course I’ve ever seen for myself. I am willing to concede that my own familiarity with it played a role in my ranking. The other chapters, which describe the courses accompanied by lovely images, certainly have their charms as well.

This is a delightfully heavy book to set on one’s lap, reading its prose and marveling at its pictures as a roaring fire in the hearth warms the living room. If playing golf is not an option right now, this book is a fine alternative.