Thus far, this new year has not been nearly as inviting for playing golf in the Cape Region as I would prefer.

My first inkling that this might be the case occurred December 26, when during a post-Christmas ride back to the area we drove smack into a total blizzard white-out, just below Milford.

By next day, we had between 12 and 15 inches of snow in our neighborhood, enhanced by some truly impressive drifting. I took advantage of my driveway shoveling opportunity to work on my weight shifts and full-body twisting, over the course of a few hours.

Post-blizzard thaws generate their own playing time delays, so golf outdoors doesn’t look likely for another week or so at best.

There’s plenty of golf to enjoy in the meantime, however, as long as it takes place between the pages of a good book or two. Fortunately, a few publishers sent me a half-dozen new editions for the winter doldrums, so I’ll have something to write about our favorite game. 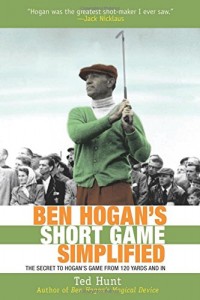 Ben Hogan’s Short Game Simplified: The Secret to Hogans Game from 100 Yards and In

I’m nearly finished reading Ben Hogan’s Short Game Simplified, by Ted Hunt (Skyhorse Publishing; $16.95 SRP). The subtitle suggests that careful study and practice will show the readers “the secret to Hogan’s Game from 100 yards and in.” I am hoping this will prove to be true.

For most golfers, the large difference in skill between our playing skills and those possessed by professional golfers is to be found in the short game. They can snuggle their approaches in closer, hit out of traps more effectively, and chip to gimme range more consistently than the rest of us.

Ted Hunt suggests that we can all learn to improve these parts of our game, by emulating one of the acknowledged masters of the sport.

Hunt first gives the uninitiated a short biography of Hogan, tied together with a well-done synopsis of the swing Hogan described in his best-selling Five Lessons: The Modern Fundamentals of Golf.

He then breaks down the elements of Hogan’s swing, beginning with putting. From there, Hunt explains how to use those same elements in the next part of the short game, chipping, the bane of my own golfing existence.

If I can transfer this part of the book’s suggestions into my own game successfully, I will become yet another Hogan disciple.

Hunt then brings the reader along to show how to apply these same fundamentals to longer pitches, three-quarter iron shots, and full swings with short clubs. Later chapters go into further detail to describe different kinds of greenside maneuvers, such as running chips or high-lofted approaches that stop quickly.

Another chapter toward the end is devoted to golf exercises, many of which can be performed at home in the dead of winter. Snow is no excuse.

The book is amply illustrated with photographs and foot/ball location diagrams that should be very helpful to the visual learners among us.

I look forward to finishing this book and applying what it says to my winter game—weather permitting.

A recent USGA Ruling of the Day shows us that sometimes our competitors can be a little too helpful, perhaps out of a more desperate need to win than we might appreciate.

Golfer A tees off on a par three, but believes his shot is either lost or out of bounds. He therefore plays a provisional ball, which (naturally) goes in the hole. He understandably has no desire to go look for his first ball, but Golfer B decides to go look for it anyway.

According to the USGA, A’s second shot becomes the ball in play as soon as he can retrieve it from the hole, as long as A’s first ball is not already found in-bounds within five minutes of Golfer B’s search for it.

I’d like to see this happen in real life, if only to see how fast some folks will run from the tee box to the green.