The King’s Speech and a master of English 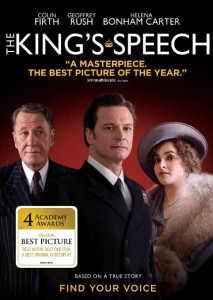 This year’s Oscar movie award nominations are out, and The King’s Speech is a prohibitive favorite to win several major categories, and a few others, besides.

The story describes the challenges faced and eventually overcome by the eventual George VI, whose crippling stammer didn’t mean that much when his brother Edward ascended to the throne. The speech impediment became a critical matter for George and Great Britain when Edward abdicated, and George had to take his place.

The new king is played by Colin Firth, better known in our house as Mr. Darcy, and his remarkable wife, the eventual Queen Mother, is played by the charming Helena Bonham Carter.

And what, you may ask, does this have to do with golf? It’s all a bit roundabout, but here goes.

I love hearing these two actors speak. I could be entranced by a dramatic reading of a telephone directory, if these two performed it.

What I would really enjoy, however, would be a chance to hear these two actors, along with Steven Fry, doing an audiobook presentation of P.G. Wodehouse’s Golf Omnibus (Gramercy Books). I reviewed this wonderful collection of short stories years ago, and much of what follows below is cribbed from that review.

Wodehouse wrote a prodigious number of humor pieces throughout a very long career. He is probably best known for his series of stories involving a hapless fop, Bertie Wooster, and his long-suffering, mentally superior butler, Jeeves.

As with that series, Wodehouse’s thirty or so golf stories in this collection also take place in the times before and immediately after World War I, or at least evoke that time effectively. A working knowledge of old golf terms such as baffie, spoon, and niblick is therefore useful. You will also encounter some now-stilted language, but if you persevere, your funny bone will be rewarded handsomely.

Many of the stories actually revolve around the oldest game, in which the fair damsel wins her man in a golf-related context.

I can easily conjure up a mental image of Firth playing Wooster, with Steven Fry reprising his role as the ever-patient Jeeves. Of course, Bonham Carter would be the damsel involved, at all times.

Until that audiobook is made, we can as least make do with the book itself, which is still available, with a little work. Reading Wodehouse is a delightful exercise in reading a master of the English tongue.

I would not, however, recommend you read this volume of short stories all the way through. As with many collections of short stories, this is a book to dip into now and again, marking off the stories as they are read and enjoyed.

Reading it straight through could produce a surprising change in your speech patterns, or set you off in search of the most recent Masterpiece Theater episode. That said, this is a book that belongs on your golf bookshelf, and deserves to be taken off that shelf and read about every year or so.

When a whiff is a stroke, and when it isn’t

A recent Ruling of the Day from the United States Golf Association raises an interesting issue of intent.

A player begins making his downswing toward his ball, but suddenly changes his mind. He can’t stop the downswing, but he does manage to swing his club above the ball instead of hitting it.

In technical golf terms, this is called a whiff.

The ruling notes, “Any doubt regarding the player’s intent must be resolved against the player.”

What we’re left with is a difficult interpretation issue, when you’re playing someone who whiffs a swing.

After all, a whiff counts as a stroke when you meant to hit the ball. It’s just that, under normal circumstances, your lack of talent made you miss it.

This Ruling creates a loophole for those who would love to say “I meant to miss it” when the unmistakable sound of a whiff carries across the fairways.

Convincing others of that intent is up to them, however.