Van Sant was one of the original organizers of the event, originally set up as a competition and fundraiser for junior golf.

For many years, Shawnee CC has been the home course for the high school golf teams for both Milford High School and Lake Forest. Van Sant was Lake Forest’s golf coach.

Unfortunately, Van Sant passed away May 5 from complications of a heart attack he suffered in the fall of 2010. The folks involved with the tournament decided to name their scholarship fund after him.

Several years ago I had a conversation about caddies with Pete Oakley, the Director of Golf at The Rookery Golf Course near Milton, and the 2004 British Senior Open champion.

Oakley was describing the different kinds of caddies he’s hired during his professional career, ranging from his sons, to friends and supporters, to the usual kind of guys who schlep golf bags for a living on the professional tours.

After discussing the pros and cons of each type of caddie, Oakley asked me if I knew the three rules that all caddies must know and follow, in order to assure their continued success in their chosen profession. Based on my extensive reading of golf books over the years, I knew the answer: “Number One, Show Up; Number Two, Keep Up; and Number Three, Shut Up.”

I think Oakley was surprised that I knew the correct answer, especially since he knew I had never been a caddie myself.

Apparently at least one long time professional caddie recently forgot about following the last one of those three simple rules.

At a tournament dinner in China with his fellow caddies and several others, Steve Williams made a reportedly derogatory and racially tinged remark about Tiger Woods, who won thirteen majors while Williams was on his bag.

The fallout from his remarks has not yet settled, but there have been apologies and other attempts at damage control from Williams and others.

In an article in the UK’s Telegraph November 9, Woods said he and Williams talked about the incident, and said he accepted Williams’ apology. Given the continued press coverage, however, I tend to doubt that the exchange between the former boss and the former employee will be the end of the matter.

Williams had a prior reputation for expressing himself in colorful language. Perhaps this episode will encourage the New Zealander to quiet down a bit.

The Rehoboth Beach Independent Film Festival runs from November 9 through 13, and this time there are no golf-related movies on the schedule. 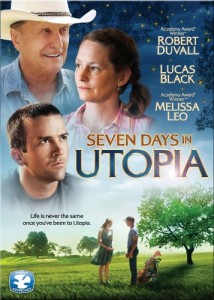 Nonetheless, a new golf movie will be available in DVD format on December 2, starring Robert Duvall.

“Seven Days in Utopia” had a relatively limited release this past summer, and did not make it to Cape Region cinemas during that time.

The plot concerns a young golfer (Lucas Black), hot to make it on the professional tour, who suffers through his first attempts.

He eventually meets up with a Texas rancher (Duvall), who imparts some valuable life lessons to the youngster.

Roger Ebert was not a fan of the movie at all, but other reviewers were more charitable, with several noting its G-rated, old-fashioned appeal.