Patrick Normyle of Lewes stopped by the Cape Gazette offices with news of his recent hole-in-one, during an Oct. 23 round in Myrtle Beach, South Carolina.

The Cape Region golfer makes an annual pilgrimage to the Grand Strand. Putting a “1” on his scorecard should make this one more memorable than the others.

His ace came on the 125-yard par-3 17th hole at The Legends Golf & Resort. Judging from his description, it must have been the Pete Dye-designed Moorland Course, one of the three Legends courses laid out next to each other on Highway 501.

Normyle said, “It was a very high 8-iron. It bounced twice and disappeared.” The course marshall witnessed the hole-in-one, and the golf pro signed Normyle’s scorecard.

The happy golfer also adhered to one of golf’s finest traditions, in which the golfer shares his joy. “Drinks were on me,” Normyle said.

Somebody’s approach to competitive golf may be all wet

Apparently in honor of Sandy, the Hurricane/Superstorm/Nor’easter on Steroids, the United States Golf Association published a recent Ruling of the Day about match play tournaments and driving rainstorms.

Bad weather is not supposed to be a sufficient excuse for discontinuing a round of golf in competition. However, there is a notable exception for match play. In that case, the players can agree to stop playing, as long as the overall competition would not be delayed by the break in the action.

In the Ruling situation, the two golfers appropriately agreed to discontinue the match due to rain. The trouble began when the rain stopped. Player A wanted to resume the round, but Player B balked, saying that the course was now unplayable.

The USGA discussed a few options. If the two golfers could find a member of the Club’s Committee overseeing the event, that person could make the call. If one can’t be found, however, Player B’s options are to either play under protest, or be disqualified for not resuming the contest.

Player B certainly has the right to claim the course is unplayable. Nonetheless, he needs to have the Committee agree with him at some point, instead of simply having his way without any independent confirmation of the correctness of his position.

I can well imagine just how friendly this particular match could quickly become under these circumstances.

The Rehoboth Beach Independent Film Festival runs this year from November 7 through 11. Thousands of film buffs will be found at the Movies at Midway on Route 1, and at the Festival tent in the back parking lot.

With over 100 movies on the schedule, this year’s Festival offers plenty of enjoyable viewing options. Unlike past Festivals, none of this year’s crop includes movies with a golf-related theme. Instead, Joe Bilancio, Sue Early, and the other RBFS staffers that helped picked this year’s lineup put an emphasis on comedies, which is a great idea.

Just because some independent films are grim documentaries of the struggles of Mongolian yak herders, that doesn’t mean they must all be similarly earnest. 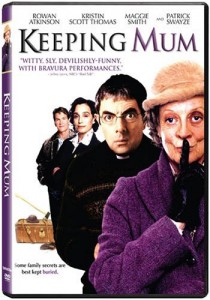 One past Festival movie was a darkly funny comedy with a golf subplot. Keeping Mum is now available on DVD.

The now-departed Patrick Swayze played a sleezy golf professional at a British golf club. He’s frequently found in the company of a preacher’s wife, played by Kristin Scott Thomas.

Rowan Atkinson, better known as Mr. Bean, is the preacher.

This little gem, which also featured Maggie Smith, is well worth your time.

One of the best golf movies of all time was also a great, stupid-fun comedy, namely “Caddyshack,” starring Chevy Chase, Bill Murray, and Rodney Dangerfield.

Among other running gags, Murray plays a demented groundskeeper trying to eliminate an obviously fake groundhog, with explosive results.

For more Festival information, go to rehobothfilm.com, or just go to the Festival tent.