Peninsula Golf in a bit of a pinch

When The Peninsula golf course/real estate development opened up in 2006, Cape Region golf and real estate were both in a very happy place.

The 1401-lot subdivision offered a Jack Nicklaus-designed golf course with a wide range of other amenities, some in place and some still just a promise.

Things have changed since then, and not for the better.

The local real estate market began to tank not long after The Peninsula opened up, and is only very slowly recovering. More than half of the Millsboro development’s lots remain for sale.

The original developers are long gone. Wells Fargo Bank is now the primary creditor, and in 2009 the Chancery Court appointed Land Tech Receiver Services, LLC as the receiver for the project.

Land Tech diligently marketed the community. The golf course and other recreational options are well maintained. Lots are still being sold, clear of any liens, but this situation can’t go on forever.

Recently the receiver went to Chancery Court for approval for a transfer of the remaining unsold parcels, as well as the common areas, back to Wells Fargo, as an alternative to foreclosure. The proposal would have also made a relatively modest payment to several creditors, none of whom would see any money if the matter went the normal foreclosure route.

Dennis Silicato, a local commercial developer and owner of two of the sold lots in The Peninsula, objected. His attorney argued that the transfer in lieu of foreclosure would wipe out any obligation for the bank to pay homeowner association dues for the upkeep of the amenities, including the golf course.

On Jan. 25, Vice Chancellor John Noble rejected the receiver’s request, for the time being. He noted the divergent cost burdens of the “in lieu” approach, which would ‘relieve[] … the potential obligation of a purchaser at a foreclosure sale to pay assessments….” He also concluded that the current homeowners would also bear “a larger pro rata share of the expenses associated with the amenities….”

The Court noted that the future of The Peninsula’s amenities “may be uncertain.” Vice Chancellor Noble also suggested that “If Wells Fargo had made concrete commitments for the good of the development, the Court’s analysis might be different.”

If nothing more happens, then, it looks like foreclosure is next on the horizon for The Peninsula. However, the judge also noted his concern about the adequacy of the factual record on which he made his decision. He indicated a willingness to vacate his order, to give the parties another chance to bring more facts to the Court’s attention, and perhaps obtain a different result.

Peninsula property owners and the many Cape Region golfers who’ve enjoyed the golf course will just have to wait and see what happens next.

Icy times on the golf course 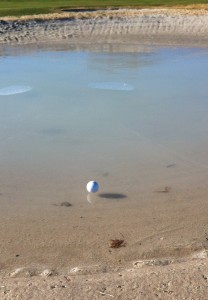 A golf ball resting on clear ice in a bunker at Rookery South. Note the ball’s shadow, separated from the ball by the ice and sun angle.

Nick Roth is one of the regular news staffers at The Cape Gazette, and a bit of a golfer. He sent a note about a recent situation experienced while playing a two-person scramble at The Rookery South: “[M]ost of the bunkers around now are filled with water. Because of the cold temperatures, the water was still frozen when we were playing. … I hit a shot on the Par 3 14th … that landed in the bunker. When I got to my ball, it was sitting on top of the ice. What to do in that situation? Luckily, we were playing a two-man scramble and I could just play my partner’s ball.“

Other than doing what Roth did, his other options were also pretty simple. The golf rules define ice in a bunker as “casual water” which is an “abnormal ground condition.”

Roth could therefore lift the ball and drop it in the bunker at the nearest point of complete relief from the ice, but not nearer to the hole.