“Annie Get Your Gun” is a famous Broadway musical, based very, very loosely on the life and times of Annie Oakley. The hit play and later hit movie included several memorable songs by Irving Berlin, including “There’s No Business Like Show Business” and “You Can’t Get a Man With a Gun.”

However, perhaps the most famous number in the long-running play is “Anything You Can Do I Can Do Better.”

It appears that Lisa Hutchins, the defending Women’s Club Champion for The Rookery Golf Clubs must have been listening to this song.

After all, earlier this summer two of those regulars, John Cullen and Rich Collins, scored holes in one on the 111-yard par 3 thirteenth hole at Rookery North. 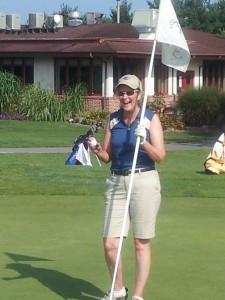 Hutchins went one better on them on August 31. Playing into the teeth of a two-club wind, she made her first-ever hole in one on the 140-yard par 3 ninth hole at Rookery North.

“I didn’t see it,” she explained. “I hit my three-wood because it was so windy, and I thought when the ball landed on the green that I hit it too far. I thought it had rolled all the way to the back. Alan Wagamon checked the hole before I did, and that’s how I knew,” she laughed.

Hutchins is a past club champion of Shawnee Country Club, and an avid golfer along with her husband, Jim, who watched his wife’s ace. Jim’s mother has also had a hole in one. Jim is still waiting for his to happen.

The fall golf season in the Cape Region often includes several golf tournament fundraisers, and this year is no exception.

The Delaware Foundation Reaching Citizens is holding their Sussex County edition of their annual three-county tournament schedule on September 26, at Baywood Greens in Long Neck. Registration fees are $175 per player, and proceeds go toward identifying and funding programs to enrich the lives of Delawareans with intellectual disabilities.

The foundation is perhaps best known for the annual Blue-Gold All-Star football game, pitting upstate football players against equally talented players from downstate schools. However, the golf tournaments have also been major contributors in recent years toward the DRFC’s fundraising goals.

The four-player-per-team scramble event begins with a shotgun start at 11 a.m., with lunch and beverages furnished during the round. A 19th hole, dinner, and award ceremony takes place in the evening. Sponsorship opportunities remain available. For more information, check the DRFC website at drfcfoundation.org, or contact Renee Blessington at 302-454-2730.

On September 30, the Cape Henlopen Senior Center will hold its Annual Golf Tournament at The Peninsula Golf & Country Club. The event helps sustain the operating expenses of the popular center on Christian Street in Rehoboth Beach.

In the second flight, Barb Hines came in first, with Donna Vaughn taking second and Carol Simon in third. Karen Harrington won first place in the third flight, while Joanne Yurik took second and Mary Mezger took third. Wetzel was closest to the pin on the eighth hole, with her attempt finishing ten feet four inches away.