If you’re going to have a hole-in-one, you might as well make it as memorable as possible. 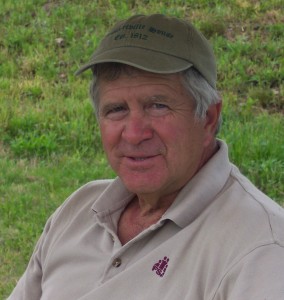 Nick DelCampo made his first ace, only 55 years after he began playing golf.

Nick DelCampo did just that during the recent King Creek Country Club member-guest tournament, with his first ace in 55 years of playing golf.

A long-time coach of the Cape Henlopen High School girls’ volleyball team, and a part owner of Sports at the Beach, DelCampo was also a member of the UD golf team, back in the Jurassic era.

DelCampo said he and playing partner Brian Crooks were one down with two to go against Mike Berger and Ron Holiday when they came to the 151-yard par-3 eighth hole, where a closest to the pin contest was also being held.

“Holiday’s ball hit a rise on the right side of the green and kicked dead left to 2 ½ feet from the pin,” DelCampo noted, making him and his partner feel “a little desperate.”

DelCampo then hit his 7-iron, which he could tell was on line, but under the overcast conditions he had a hard time seeing the ball as it approached the green.

However, Kings Creek assistant pro Erica Bensch happened to be watching from the nearby cart path area, as his ball “ticked” the pin and dove into the hole. “On the closest to the pin sheet, I just wrote down 0 inches,” DelCampo said, and he called his wife Cindy with the good news. After being convinced he was telling the truth, she texted their kids.

Meanwhile, Bensch radioed back to the clubhouse with the news. DelCampo’s luck continued, because he had “invested” $5 in hole-in-one insurance for the season. Most of the tournament golfers waited until after the tournament’s open bar closed that afternoon to then draw down upon DelCampo’s “policy limits.”

The KCCC insurance payoff also came with a $250 credit in the pro shop, a beautiful wooden display case with the lucky ball, a raised metal insignia of the club, and an engraved plate with all the details.

But when asked how he and Crooks finished in the tournament standings, DelCampo said they were awarded a “participation certificate.”

I blame the self-esteem movement.

Captain Michael DeStasio was honored for his leadership of the Viking squad.

Smarrelli said, “This is one group of youngsters that coaches dream of having, no matter what sport.”

Leslie Ledogar won the third flight, while Rosanne Smith finished second and Brenda Butterfield came in third. Julie Dickson won the Closest to the Pin contest on the eleventh hole, at 22’11”.