I have had the good fortune to play a few of the same golf courses used by the PGA Tour, such as Pebble Beach Golf Links and the Copperhead Course at Florida’s Innisbrook Resort.

Among other insights from those experiences, I learned that the pros can make very hard golf courses look pretty easy, at least by comparison to anything I did on these remarkable layouts.

Frankly, there is no substitute for raw talent combined with years of practice and coaching.

On the other hand, the pros we watch on TV, such as those in this week’s U.S. Open, can still provide us with valuable insights on how we can improve our own golfing skills. 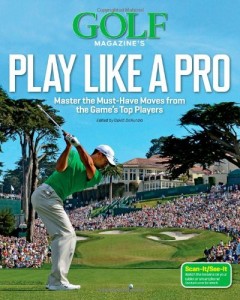 Golf Magazine’s Play Like a Pro: Master the Must-Have Moves from the Game’s Top Players

That’s the point of the new book issued by Golf Magazine, Play Like a Pro: Master the Must-Have Moves from the Game’s Top Players (Time Home; $29.95 SRP).

Edited by David DeNunzio, the book includes both new material and some that previously appeared in past issues of the popular magazine. It is divided into the traditional golf instruction sections, such as driving, approach shots, the short game, and full-swing skills. Each section discusses the techniques used by the Tour players whose reputations fit within one of these categories.

For example, two-time Masters Champion Bubba Watson is the focus of the piece on swing speed, for obvious reasons. Adam Scott is the model player for those seeking help with their overall swing, given that Scott’s own skill in that department is a thing of beauty.

Jim Furyk is well known for his greenside bunker play, so how he does it should readily translate for amateur golfers, at least by comparison to Watson or one of the other Tour bombers off the tee. As with the book’s other sections, this segment includes great photo sequences and step-by-step tips.

The book also includes links to 65 instructional video clips, accessible by smart phone or tablet. Those clips should be a huge help to those who need to see how to improve, and not just read about it.

The Rehoboth Beach Country Club 18 Hole Ladies held their weekly tournament on June 4, with awards in both the team and individual categories.

Diane Strickler came in with a 65 for first place net individual, while Suzanne Moore took first place individual in the gross score category with her 88.

Rosie Smith won first place in the third flight, followed by Pattie Magee for second and Prabah Karapurkar in third. Barbara Wisneski won the Closest to the Pin contest with a shot to the fifth hole that ended only nineteen feet away.

Carol Ellison’s tee shot on the sixteenth hole finished twenty-one feet ten inches from going in, earning her Closest to the Pin honors for the day.