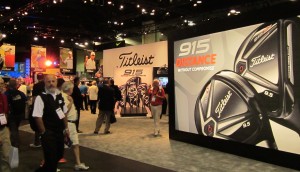 The booths for the PGA Merchandise Show for the major golf companies, such as Titleist, were typically impressive.

The 2015 PGA Merchandise Show took place Jan. 20-23 in Orlando, FL, with most of the action at the huge Orange County Convention Center.

This was my second time attending the long-running golf business showcase, where thousands of PGA golf pros mingled with over 1,000 exhibiting companies, 1,400 media representatives, and thousands of others in the business of golf.

During this year’s credentialing process, I let the folks running the Show know what I would be interested in seeing, and received dozens of invitations for demonstrations, interviews, and press conferences.

That little bit of added structure reduced the chance of being overwhelmed by the sheer scale of the event. 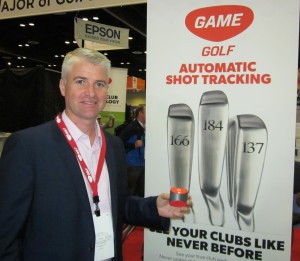 My first stop at the Show on Wednesday, Jan. 21 was the front row of the PGA Forum Stage for a presentation by GAME GOLF, featuring 2010 U.S. Open winner Graeme MacDowell and company president John McGuire.

The performance statistics tool is now available in 96 companies, and over 36,000 courses have been mapped into the GAME GOLF database.

In addition, the USGA and the R&A approved the device for use in competition. As McGuire agreed during our interview later that morning, in part that’s because it only collects shot data during the round, leaving the potentially time-consuming self-analysis for a later time and place.

MacDowell said he loved the device, and is spreading the word among his fellow pros. He noted that it measures dispersion as well as distance, and also commented that 92% of golfers under-club their approach shots.

“Measurability is the emerging future of the sport,” he said. “The game is statistics-driven. Interpretation of data is important and powerful. This helps me know which parts of my game are weak and strong. I think the future is bright for this technology,” MacDowell said.

McGuire said the collected data are providing additional discoveries, such as the fact that most golfers hit their 3-woods as far as their drivers, and that other clubs are never used.

Other generalized information also helps explain the differences among golfers. For example, players who average 90 to 95 for a round land a ball in regulation on the greens about half as often as players who average 70 to 75. The numbers for a pro like MacDowell are even starker.

McGuire said the data gathered by the device should help PGA pros help their students, by providing benchmarking information and a ready means to visualize the data.

During my interview with McGuire later that morning, the affable Irishman from Galway proudly noted the direct investment the PGA made in the fledgling tech company. He then described how the technology worked.

Golfers wear a small lithium-ion battery powered device on their belts, and insert small, lightweight caps on the ends of each golf club. After tapping the chosen club to the belt device before each shot, the equipment uses GPS and motion sensors to capture the results for later downloading and analysis.

We discussed the under-clubbing results the company has already uncovered, and its test center at Lake Merced in the San Francisco area. McGuire also stressed how valuable the data can be when it is gathered in competition. As he pointed out, no one plays in a tournament exactly as they perform on the driving range.

The company also permits data sharing among other players, permitting golfers to follow each other’s performances if desired.

The suggested retail price is $199. It is sold in over a thousand pro shops, golf stores such as Golfsmith, Golf Galaxy, and Dick’s, as well as in Apple stores. For more information, go to gamegolf.com.

On Wednesday I also ran into The Rookery’s Head Golf Pro Butch Holtzclaw and Rookery North Pro Kyle Deas, which takes some doing in a million square feet of convention center. They chatted about their experience the day before at the Show’s demo day session at the Orange County National Golf Center and Lodge. They were headed for an appointment with FootJoy, a major shoe line at the Rookery’s two pro shops.

For two guys who are usually pretty laid back, they looked excited to be there.