A new book for the “Regular” golfer

The golf industry has suffered through the last several years. The long-running recession took its toll on golf courses, club makers, and even the golf book publishing industry.

When I began writing this column in the late 90’s, there seemed to be a steady stream of golf books each year, of all varieties. The number of offerings has dropped considerably more recently, similar to the course closures at Myrtle Beach, SC or Ocean City, MD.

There now seems to be a bit of a recovery. For example, 175 new vendors are renting booths at this week’s PGA Merchandise Show in Orlando, FL, and a few more golf books are being offered to me for review. 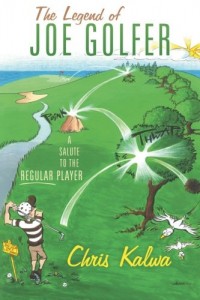 The Legend of Joe Golfer: A Salute to the Regular Player

I recently finished The Legend of Joe Golfer, a first book by Chris Kalwa, available through Amazon, authorhouse.com, and the Barnes and Noble online bookstores ($23.95 SRP).

This is what folks in the trade call a self-published book. I treat these books with respect for the effort that went in to creating them, and review them with the hope that some constructive criticism will be accepted.

Kalwa is a Toronto resident, a past fitness instructor for Team Canada’s pro tennis prospects, and a former elementary school teacher.

He is also nuts about golf.

He was a late arrival to the game, only beginning his relationship with it at age 40, an all-too-common victim of tennis injuries. Kalwa mucked about for awhile, and then decided to take the game seriously enough to learn how to play it better.

Much of his book is devoted to convincing regular golfers to do the same thing, especially those who have either recently begun the sport or who have played for a while without noticeable improvement.

The best parts of Joe Golfer acknowledge the fundamental difference between golf professionals and most of us amateurs–we hit bad shots more often, and we can double-down and make the next shot worse at any time. Kalwa refers to this as the Bonehead strategy.

He suggests players adopt the Smart rescue-shot strategy instead. For every common situation faced by most golfers, such as a drive into the rough, a fairway bunker, or side-hill lie, Kalwa provides handy tips on how to accept the situation and recover with a minimum of additional strokes.

As one might expect from someone with Kalwa’s background, which he details at length, he is also a devotee of physical fitness and good nutritional practices. This section of his book features good short descriptions of golf-helpful aerobic exercises, strength and stretching routines, and some diet suggestions that could do everyone a favor, golfer or not.

The accompanying photos should also be useful, especially for winter-bound golfers trying to keep in shape until spring rounds beckon. Kalwa also has intelligent things to say about new golf equipment and the stubborn truth that one can’t really just buy a game, especially one that can be maddeningly difficult.

These parts of the book make it worth your consideration.

Other parts were in serious need of editing. This book is over 360 pages long. By breaking up long sentences into two or three, cutting back on alliterative adjectives, and reducing the occasionally over-enthusiastic repetition, it could have been much shorter, and better.

Herman Melville and James Joyce are exception, not the rule.

The rest of us, even those scribbling about golf, need to remember that brevity is a good thing.

That said, Kalwa has some useful advice, especially for those interested in improving their game with a realistic approach and attitude. Just don’t feel obligated to do more than skim the parts that aren’t devoted to instruction.