FootJoy is a major player in the golf apparel industry, and describes itself as the Number 1 shoe in golf. 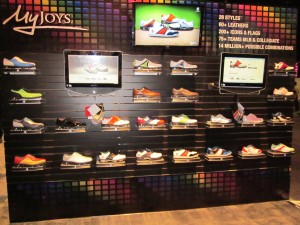 The Massachusetts company, a division of Acushnet along with Titleist, also runs a special order golf shoe operation called MyJoys, which had its own display at the 2015 PGA Merchandise Show.

MyJoys offers 28 different styles, with over 60 leather options, over 200 icons and flags, along with over 75 team logos from major league baseball and the collegiate teams. As the company describes it, golfers have over 14 million combinations to choose from in designing and creating their own shoe.

Some golf addicts in the Cape Region have a pair or two, such as Good News Natural Foods Store owner Rich Collins.

I met with Rita Lepage, the charming marketing manager for MyJoys, who was happy to chat about her company and her role in it.

The 24-year veteran of FootJoy started out in IT, and developed expertise in website creation. Given the complexities of the MyJoys’ special order operation, her background made her well suited for her current assignment.

Lepage showed me the special exotic leather options now available, including all-over printed designs that look like lizard skin or a recently deceased alligator. These shoes come in spiked or spikeless varieties, and the latter can translate immediately from the golf course to street wear.

In the United States, golfers can go directly to the MyJoys website at footjoy.com. They first pick a style by gender, and then select the size and width. From there the shopper then decides on the colors to be used on the base, the saddle portion if any, and the lace area.

Additional personalization comes next, with buyers choosing monograms if desired, or logos from the licensed selections. At that point, buyers can see exactly what their shoes will look like, and print off a copy. Each order is given a discrete order number, used by MyJoys to make the shoes exactly as requested.

Buyers in other countries work with their local golf pro shop to place their orders.

Customers can receive and return a special fitting sample to confirm the model’s fit for their sizing. For those whose feet are not the same size, these special orders can easily handle the challenge. That’s less expensive than buying a pair of 10s and a pair of 11s, and throwing away the two extra shoes that won’t fit.

Lepage said that in her company’s recent experience, average shoe sizes are increasing. “Women used to average 7, now they’re 8 to 8 and a half,” she said. “Men used to average around 10, and they’re now averaging 11 to 11 and a half. We’ve even had an order for a size 17 extra-extra wide.”

She also said that the company’s BOA closure system is becoming increasingly popular. This option uses a winding mechanism on the back of the heel to tighten wire-based laces.

Lepage said the college logos are “hugely popular,” and the MyJoys shoes are also a sought-after tournament prize option. She attends the tournament, and works with the winner to create and order their special prize shoes. She also admitted to being continually surprised by the choices made by the customers.

Lepage described seeing one man wearing pink saddle shoes with a name stitched into the side. He explained that it was in memory of a loved one who had succumbed to breast cancer.

As one might imagine, these special order shoes do not carry with them outlet store pricing. The lowest price models begin at $175, with the premium shoes with the BOA system topping out at $390.

For golfers looking for something uniquely theirs, however, MyJoys are a great option.