The second official week of spring practice for the Cape Henlopen High School golf team began on the playgrounds of Lewes Middle School, instead of the practice range at Rehoboth Beach Country Club.

Head coach Claudio Smarrelli said the team took over the old Lewes football field with a makeshift pin and flag. The kids worked on hitting golf balls above and below the goal post, which is a good way to learn how to flight their shots under challenging conditions. They also tried their luck at 100-yard shots. Since this was a football field, there were no questions about the actual yardage.

Snowstorms knocked out most of the first week of practice. Smarrelli said he and Assistant Coach Samantha Purple worked with the golfers in the Cape gym on Wednesday, March 3, only to find the school closed on Thursday and Friday.

I caught up to the team on Tuesday, March 10, as they huddled together on the practice range at RBCC. They had already been on the putting green, and the afternoon downpour that mostly finished just as I arrived had done little to dampen their spirits. There was plenty of laughing and kidding around, as they lined up for the traditional group photograph accompanying this column. 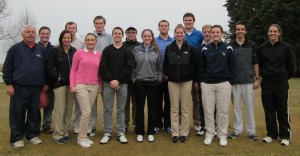 Eleven seniors and five juniors make this an older team than in most years. Smarrelli hopes their experience and growing maturity pay off with an even better performance than last year, when they finished 12-2 and did very well in the State Championship Tournament.

Brock Maloomian and Matthew Zehner are the two sophomore try-outs, while Brandon Mays-Harp and Wesley Lewis make up the freshman members of the squad.

From this group Smarrelli and Purple will determine the first group of ten varsity members, with the rest working on their game as JV members. Smarrelli often calls up JV players for matches during the season, as occasional absences and injuries can take their toll.

Smarrelli is still convinced that high school golf in Delaware should be a fall sport. The Delaware Interscholastic Athletic Association still insists on a spring schedule, however, suggesting that March through May is when the golf courses will accept their hosting responsibilities. Smarrelli thinks more tri-matches could make fall golf more palatable to the host courses, while giving the kids a chance to play in more consistently pleasant weather conditions.

Coach Smarrelli also thanked Frank Scibilia and his friends for their kind donation to the Vikings of four dozen golf balls from the Rookery Golf Course. He also appreciated the donation of brand new golf clubs by James Biever last season to the squad.

If the weather permits, the Vikings’ first match will take place March 25 at The Peninsula Golf & Country Club near Millsboro, when they play Sussex Tech. The team travels north to Wild Quail Golf and Country Club the next day, when they will compete against Polytech High School. 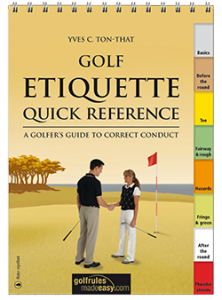 The folks at GolfRulesMadeEasy.com sent me a copy of their “Golf Etiquette Quick Reference” guide. (Artigo Publishing, $12.95 SRP), by Yves C. Ton-That.

The 48-page flipbook is spiral bound, plastic coated for easy access and storage in a golf  bag, with well-done illustrations accompanying the pithy text. Covering the full range of a day’s round, from arriving at the course to the 19th hole, this is a handy guide to acceptable behavior for golfers.

If Rory McIlroy’s recent club-throwing performance at the Blue Monster course is any indication, it’s always a good idea to remember how to make the day as pleasant as possible for yourself and your playing companions. McIlroy’s quick and obviously honest apology was also a good thing.

The booklet also includes useful first aid tips, and a guide to staying safe during thunderstorms.